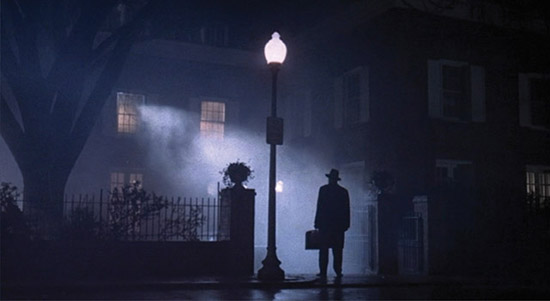 You had to expect this to be my #1 horror film, of course. After all, this is the moment my father had been gearing me up for, and when I turned 18, we visited the house my father grew up in, set up camp in the basement, turned out all the lights, and then… those damn violins. What makes it even more eerie is the original story by William Peter Blatty was based on a case in Georgetown of a child who’d had an exorcism. This child’s house was only a few blocks away from where my dad grew up.

Everything about this film is absolute nonstop terror. The acting, so simple and yet so effective; the direction, subtle with very little flash; the lighting and sound, silence, shadow, and darkness acting as characters in their own right; and of course, the Devil himself. The stories surrounding this film are almost as notorious as the original story. From the supposed hauntings to the work actress Mercedes McCambridge did to voice the Demon–everything from forcing herself to vomit to smoking a dangerous amount of cigarettes to get the perfect voice of absolute evil. And while she didn’t do the actual voice acting, Linda Blair played her role of the possessed Regan with such bravery and veritas one felt as if they were actually in the room, experiencing the chaos and terror this young girl went through.

Ultimately, though many may find the film dated, and there’s an unfortunate remake in the works, this is a movie for those who enjoy storytelling, who want to earn the scare and are willing to allow themselves to be pulled into a nightmare without knowing exactly what’s going to happen. The original trailer for this film was enough for many to pass out and run screaming from the theater–so much so, Warner Bros. had to release a different trailer just to get people in the seats on opening night.

I honestly can’t explain every single thing that made this not only my absolute all-time favorite horror film but also one of my favorite films of all time. I’m also quite fond of the original book Blatty penned to tell this horrific story.

I hope you enjoyed my list over this past week. Happy Halloween to you all!

I’d love to add more films to this list, maybe in the future expand my list for some new favorites! What are some of your favorite horror films to ring in this fine holiday?