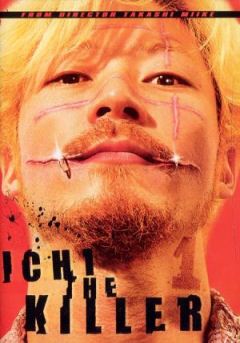 Here’s the thing. One does not simply talk about Ichi the Killer. This film has become such an integral part of my development as a hardcore Japanese film fan that if I were to just follow the “synopsis-critique-conclusion” formula of review, I’d feel like I was insulting the brilliance that is Takashi Miike and all his over-the-top nastiness.

So, let’s compromise. I give you a short synopsis and then you allow me to completely lose all reasonable sanity. Deal?

We open up with what can only be described as a slaughter in a hotel room. A cleaning crew has come to make the horror and bloody grime of the place a thing of the past. The one question that’s on anyone’s mind who’s just walked into a bloodbath is, “Who the hell could possibly do such a thing?!” We have our answer in the underdeveloped and sexually repressed psychosis of Ichi (Ohmori), a product of an obvious form of childhood abuse. He’s been hired by a very disturbed individual named Jijii (Tsukamoto) to do his sadistic bidding. Unfortunately, Ichi has treaded on Yakuza turf and decimated someone he shouldn’t have. That’s when the maniacal Kakihara (Asano) gets involved. He’s a man as interested in giving pain as he is receiving it, a case of sadomasochism that stretches far beyond one’s preconceived notion of pain. What results is a gore fest the likes of which hasn’t been witnessed before.

Ichi the Killer may be Miike-sama’s bloodiest, most powerful affair, all 129 minutes of it dripping with all the wicked and macabre things that make gore what it is. However, as I’ve come to discover about Miike’s work, it’s not just a means to see how far he can push the boundaries of “acceptable” gore, if there is such a thing. He manages to give his characters stories wrought with pain and hubris. He paints Ichi as nothing more than collateral damage to the disgusting pitfalls of humanity, a man trapped in the mentality of an overly hormonal 16-year-old boy whose constant bouts of sexual frustration are acted out in appalling fashion through erratic slayings. All the while he yearns for acceptance from someone who’s managed to be the only father figure he’s ever known. However, Kakihara is a man whose past is so muddled with pain it spills out of him only to play out on his face. With Kuchisake-like scars (which he keeps pinned together), he projects an unspeakable hostility toward humanity, an insatiable desire to inflict unconscionable pain upon all those who step in his path in order to find some sort of meaning for his life.

The psychological dynamics of Miike’s films are commendable, even worth in-depth study. However, if we’re talking about what’s on the surface, let’s be real, here: Ichi the Killer is just foul and disgusting. It’s easily one of the most grotesque films to come out of the last two decades. It’s the delicious sort of filthy that stays in your head for days, weeks at a time. I was so repulsed, it became the only film I wanted to watch for almost three weeks. Even Miike’s Audition – which still stands out in my mind as one of his best – had nothing on the sheer amount of repugnance it spewed. For that alone, Ichi the Killer has become one of my favorite films of all time.