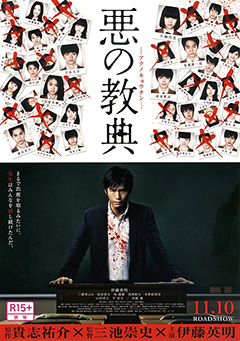 Great inspiration for films often comes from music and Takashi Miike’s brilliant feature Lesson of the Evil is no exception. The sweet sound of Mack the Knife fills the film, the lyrics of which perfectly enhance this adaptation of Yusuke Kishi’s novel Aku no Kyoten.

Oh the shark, babe, has such teeth, dear
And it shows them pearly white

Seiji Hasumi (Itô) is as handsome and good-hearted as a teacher gets. The way he says “magificent!” to his English students is just plain adorable, but appearances can be deceiving, as his past is littered with death of all kinds. His charming nature is soon thrown aside to reveal a murderous intent that will leave all of his students and even some co-workers in immense danger.

The name Miike is practically synonymous with cartoon violence and blood abounds at this point, and Lesson of the Evil is no exception to this. In the same year that brought us Ace Attorney, Miike delivers a deliciously violent film that feels just right in his oeuvre. What makes this piece stand apart from the blood lust of something like Ichi the Killer is the sheer restraint that the film’s first two acts present.

Working much like the masterpiece Audition, Lesson of the Evil is a reminder that Takashi Miike is a master of the slow burn. The director takes his sweet time setting up the story, proving that he can write films as well as he directs them. An atmosphere of mystery is created slowly but surely, as the first ninety minutes or so serve as a set up for what comes in the final act. Each seemingly meaningless student activity or interaction throughout ends up having an impact on the outcome of a character’s life in some way or another, and it’s that attention to structure that makes it such an interesting movie.

For all the mystery that the story presents, it’s jam-packed with dark humor and intense scenes that will leave any horror fan pleased. At times throughout its well-paced first acts, it attains this fever dream quality in some flashbacks that make it all the more interesting. There’s a creativity to death at play throughout, not only in the way people are executed, but in the way everything is shot by Miike and frequent collaborator Nobuyasu Kita. As the film descends into a slasher flick of sorts, the grand finale takes place in a colorful house of horrors that’s as terrifying as it is thrilling. It’s not that the idea of a massacre set to Mack the Knife isn’t unsettling, but one can’t help but laugh at the almost cartoonish way a body flies across the room when shot.

There is no need for hackneyed commentary on present-day school shootings, as the idea of an event like this happening is already something that an audience has in mind. The terror of it all comes in the idea that the people who we have the most trust in, like an innocent and supportive English teacher, might just be the ones to turn and kill us. Hideaki Itô plays his role impeccably, more charming than any of Hitchcock’s sociopaths and yet as sinister as any other shotgun wielding madman. It’s a performance that genuinely makes one uncomfortable about even thinking that Hasumi was once the ideal man as soon as the death toll starts to grow.

With this slow-burning, but wildly imaginative, slasher flick that is likely to impress many, Takashi Miike strikes again. Lessons of the Evil not only reminds the world that he is an excellent genre director, but proves that he should try his hand at adapting horror novels far more often.