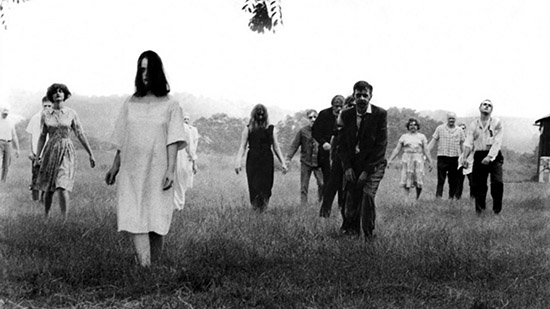 The first and best zombie film. George A. Romero had a vision and executed it with soul, intelligence, and precision. This black-and-white film may have been one of the most sophisticated social commentaries of the genre: a look at the frailties of humanity and even more what humans will do to survive. Even further, it paints a very visceral picture of the social landscape of the time. Though it may not have been his original intention, casting the hero as a black man spoke volumes of the racial tensions of the time. It works on so many levels and across the decades as a look at the violent history of the States, especially concerning the relations between blacks and whites.

Compared to the zombie films that would come after it, the gore here was relatively tame. However, actually watching the living dead gnaw on raw flesh and claw their way into a house filled with a group of people dealing with a power struggle and their own fears come to grisly fruition really brought terror to audiences, forcing them to question their own moral high grounds. The ending scene and the credits actually took my breath away. I was absolutely appalled at the similarities between the men with their ropes and shotguns taking down Ben just as the sun comes up to film reels I’d seen of the Jim Crow South left me unsettled for quite some time after the screen went black.