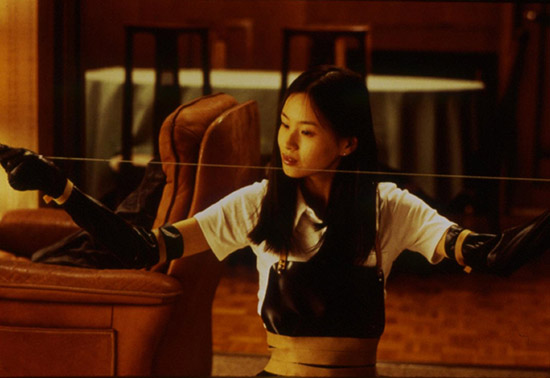 My first and favorite Japanese horror film, and the film that began my love affair with Takashi Miike. It was gruesome, frightening, and more emotional than you’d initially imagine. The iconic final torture scene had me grimacing, repulsed by what I saw on the screen but completely incapable of looking away. And while that scene certainly had me on edge and even feeling pain in my extremities, the actual build-up was so cringeworthy I’m not quite sure how I got through it.

But as grisly as the movie is, it’s got so much soul, such emotion. All Aoyama Shigeharu (played like magic by Ishibashi Ryo) wants is to move on from the loss of his wife, and his friends want him to find happiness again. Hence the audition process to find him another companion. The woman he’s ultimately attracted to, Asami (played with chilling effectiveness by Shiina Eihi), is actually dangerously desperate for love and affection. Her obsession plays out so well and so frighteningly, Audition started me on the path of Japanese horror. As I’d already been indoctrinated into the world of Japanese animation, it wasn’t too far of a stretch, but it did open my eyes to something I never would’ve even imagined.