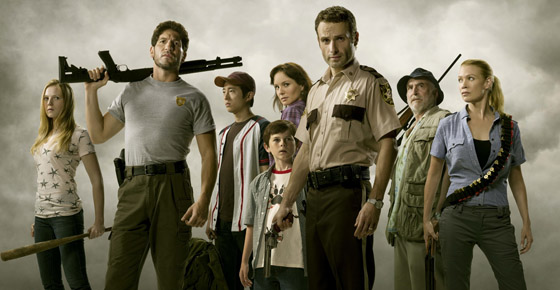 Last year, TV programming during Halloween wasn’t only about the usual horror movies that would air around that time of the year, but it also included the premiere of AMC’s zombie apocalypse show The Walking Dead.

Developed by Frank Darabont and based on the comic book series of the same name by Robert Kirkman, Tony Moore and Charlie Adlard, The Walking Dead tells the story of the aftermath of a zombie apocalypse and follows a small group of survivors that travel across the US in search of a new home away from the undead.

The first season focuses on Rick Grimes (Lincoln), who was gunned down while doing his sheriff duties along with his best friend Shane (Bernthal) and put into a coma. Some time later, he awakens and notices that he is now living in a post-apocalyptic world overrun by zombies. He escapes the hospital and notices that his wife and son are gone, which leads him to set off towards Atlanta, where there’s a quarantined safe zone and his family might be there. While Rick was in a coma, his wife Lori (Callies) and his son Carl were hiding from the zombie in a camp along with Shane and the other survivors. Also, Lori and Shane are having an affair. So not only does Rick have to deal with a zombie apocalypse, but his best friend is banging his wife. Damn.

The pilot episode was so great, it can get most people hooked to the show. The rest of the episodes are enjoyable to watch. It does follow the comic book very closely for the most part with some minor changes that don’t alter the story. The mix of horror and drama in this show is well done and the despair shown by the survivors is believable. But what really stands out in The Walking Dead is that it feels real and looks cinematic.

There’s a second season coming around October this year, which happened thanks to the high ratings for the pilot episode. I’d recommend anyone to give The Walking Dead a chance, even if you don’t like zombies. High quality storytelling in the first season, whose only setbacks so far might be the lack of a human antagonist and the small amount of episodes for the first season.