Greetings, fellow fangirls and fanboys! This week a promising franchise lost its director, but might gain a cooler one (no offense, original director!) for its trouble. Also, Sherlock Holmes news on both TV and film, and our usual dose of MCU news, where both Sherlocks are part of. Here’s how the week started~

In not so great news, director Tim Miller is no longer attached to the Deadpool sequel. Apparently, there has been some “creative differences” with Ryan Reynolds, where Miller wanted more of a stylized sequel, and Reynolds wanted more of the R-rated comedy and violence mix. I can’t believe I’m writing this, but I’m siding with Ryan Reynolds on this one. The tone and style of the first movie fit Deadpool and it’s what made it a hit. Also, Miller’s idea of Kyle Chandler as Cable? Nope! While Stephen Lang is my Cable, I can accept a substitute as cool as him, but Kyle Chandler, as good as actor as he is, ain’t it.

Wow! Jessica Jones season 2 will be full of female directors! Yep, according to showrunner Melissa Rosenberg all 13 episodes will be directed by women.

That Flash, Supergirl, Arrow, and Legends of Tomorrow weeklong crossover event beginning on November 29th? Will share a common title: “Invasion!”, yep with exclamation point and all! This is what Arrow showrunner Marc Guggenheim had to say:

I’m giving you an exclusive — because you’re the only one who’s asked. Arrow episode 508 is called ‘Invasion!’ with the exclamation point. And Legends of Tomorrow 207 is going to be ‘Invasion!’. I’ll leave it up to you to guess what The Flash is called.

Check out Lynda Carter as President of the United States in this Supergirl clip, where she discusses her Alien Amnesty Act with Martian Manhunter (David Harewood).

The episode also brough us our first glimpse of Miss Martian (Sharon Leal) in a clip and some captures.

We saw Empire’s Fantastic Beasts And Where To Find Them subscriber cover last week. Well, here’s the regular one with human characters together with the Thunderbird, as well as a new creature: the Bowtruckle! 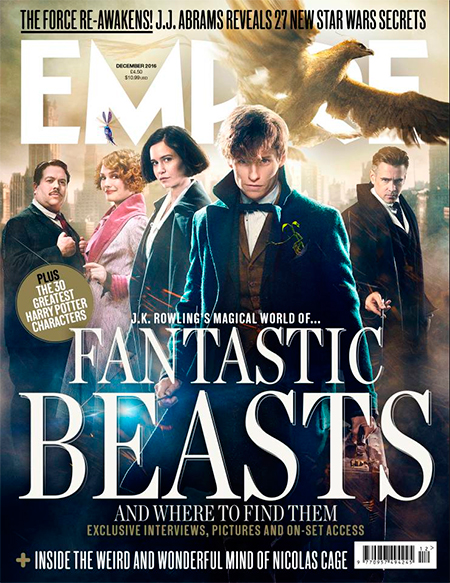