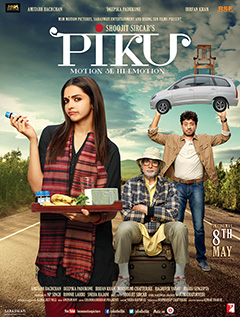 Female stars in India are having a good run lately, not only are they getting layered roles and being treated like actual people on film — some of them, anyway; but they have also become commercially viable. Several big budget critically-panned masala commercial films starring superstars have only made double their budgets, superstar Kamal Haasan’s February [1] and July’s releases are still to recover money, and Amitabh Bachchan’s and Dhanush’s almost ego-stroking collab on Shamitabh is scratching to make it back.

In short, the “superstar” with inflated paychecks is also becoming a dying breed in India.

In the meantime, Anushka Sharma’s NH10 did okay on a limited budget, while Kangana’s sequel When Tanu Weds Manu Returns has crossed over the coveted 100 Crore Club and crossed 200 Crore, making nearly four times its budget and becoming the only film with a comparatively prominent female lead in the list of India’s current biggest box office hits. Piku has also been minted with the 100 Crore mark.

However, Piku is an anomaly and a breath of fresh air in a list plagued with titles filled with big over-the-top (and often unnecessary) musical numbers, immeasurable amount of bang for your buck, loud colors and love stories. Following a cool muted color palette accompanying the soothing soundtrack and score by Anupam Roy, the mood and setting ground the eccentric characters that are part of Juhi Chaturvedi’s script, beginning with Piku (Padukone)- a tense 30-year-old architect with a dad problem. At 70 years old, headstrong (but highly hypochondriac) Bengali Bhashkor Banerjee’s (Bachchan) life revolves around his health problems, specifically his bowel movement, informing his already stressed out daughter of every possible state, color or shape changes during his pooping activities.

The biggest strength is that characters and actors’ chemistry just work to create the perfect dynamic- Padukone works well with both Bachchan and Irrfan, and both of them work well with each other, specially when Irrfan’s Rana has to hit back at most of the harshest comments coming from the no-nonsense-but-mine Mr. Banerjee. Their over-the-top situation is so well established that it flows naturally and it’s understandable. My only pet-peeve is that Piku feels like an older character, definitely not in her early 30s… maybe pushing for mid-30s, but definitely more like a 40-year-old, able to be one of the pillars in the architecture firm where she works at, and being the only daughter of a man already in his 70s.

But that’s just me, Deepika’s definitely grown on me and I’m glad she’s experimenting a lot more, and I’d be happy to see her exploring more characters like this instead of the ones in *cough*HNY*cough* And I loved LOVED the fact that Amitabh Bachchan’s character just kept pressing for her daughter to not be married, though that was totally part of his hidden agenda.

This is the type of movies that you should be sending to our multiplexes, India.