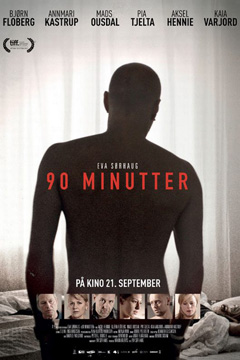 Eva Sorhaug’s second feature film, four years after Cold Lunch — nominated for the Tridens Big Fish Award at Tallinn Black Nights Film Festival — starts in a soft manner but 90 Minutes ends intensely, aiming to make a psychological study of three men through three different unrelated stories, which ended up in murder. The title embodies exactly the film’s duration: 90 minutes of torture for the eyes and for the mind too.

The first story follows a man putting an end to his newspaper subscription and negotiating to get rid of his house, due to this, it makes us suspect of financial problems and the sadness in his face is quite evident. In the meantime, the second story is about a disturbed man who doesn’t live with his family anymore, but keeps visiting them often. And the final story depicts a shameful case of domestic violence, starting with a disgusting scene of a tied woman being raped by a man who is addicted to drugs. A baby is lying inside a cradle in the same room, and every time he cries the man gets out of control. This is the most violent story, the most painful to watch, and slightly more interesting than the others, since we get to know a little more about the man in question. When outside his home, he shows to be a good-hearted guy and completely normal, and the film lingers much more on this story in order to impress the viewer with the rampant violence and the presence of the baby, both of them crucial factors of tension and uneasiness.

It’s hard to be sure of what Sorhaug intended to show us with such underdeveloped characters and a poor script. Broken homes? Hidden sickness? Evil? The heavy stuff was so explicit, but the motives or what led to the actions are left aside, since nothing was said or shown about the characters’ past. Despite the vague hints that it might suggest, I got unsatisfied about the lack of depth in the characters’ fabrication.

The competent direction and convincing performances were the positive aspects of 90 Minutes, a depressing and feeble analysis of three disturbing minds that only shocks through the violence itself. Everything is gloomy and sad, without a single happy scene or anything concrete to say. We already know that this world is full of crazy people, many of them “disguised” as normal, a fact that by itself isn’t sufficient to make a good story.