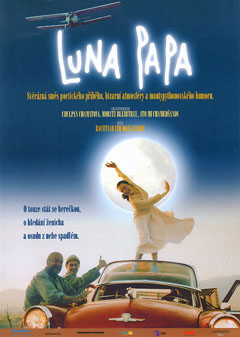 Luna Papa tells the story of a 17-year-old named Mamlakat, whose love for theater and the arts lead her to one of the theater company’s presentations. She misses it by a hair. As she is walking in the dark paths only lit by the moonlight, she is mysteriously seduced by a no-face man. Next thing she knows, she wakes up in the morning with her torn dress… no longer a virgin.

Now, you may think this is all serious business and that the film gets all drama from this point forward, but it doesn’t.

Luna Papa is actually the fantastic tale of a young mother from the point of view of an unborn baby. Whatever your opinion on pro-life or pro-choice is, you can’t just dismiss this simply as either of those.

Unless I really REALLY suck at math, Khamatova should be in her 20s while shooting this role, but actually looks like she’s about 15. She’s terribly endearing and terribly sassy.

Khamatova’s mentally ill brother is played by German actor Moritz Bleibtreu… who I thought was going to be playing a talking role in Russian, but he mumbles one-word lines. It isn’t bad. He’s actually very effective and quite endearing as an over-protective older brother. As well as the father, who despite cultural prejudice in the town does a lot for her daughter and son.

I have no idea if it was the lack of any knowledge about the film, but that ending came from nowhere. It didn’t feel like cheating because there were a lot of things that came from left field since the beginning. Luna Papa — I still have no idea why it’s called like that — was just a pretty nice blend of wacky comedy with some high tension moments.

My only real big issue with a highly entertaining film like this is that Khamatova — who is of Tartar origin — doesn’t look like she’s a Tajik girl. Not like I have any grasp of ethnicity, but she felt so out of place from where the movie was taking place.