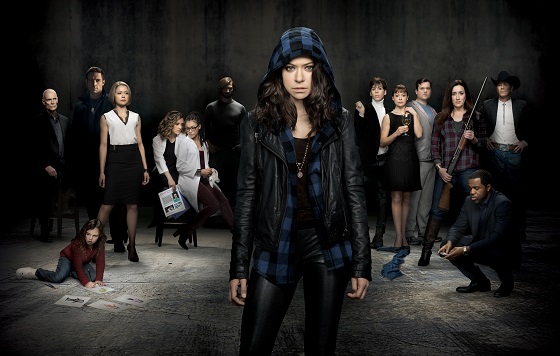 Conspiracy thriller Orphan Black takes its second season’s episode titles from the writings of influential English Renaissance philosopher and scientist Francis Bacon. The new set of episodes begins with “Nature, Under Constraint and Vexed,” a fitting description for all of the clones played by Tatiana Maslany. Relentless survivor Sarah Manning (Maslany) is on the search for her daughter Kira (Skyler Wexler). Sarah suspects Kira was kidnapped by Rachel Duncan (Maslany), a clone raised and now employed by the Dyad Corporation. One of the few Sarah can trust is foster brother Felix (Jordan Gavaris), though she harbors doubts about their also-missing foster mother Siobhan Sadler (Kennedy). She considers reaching out to detective Art Bell (Kevin Hanchard), who with his partner Angela DeAngelis (Inga Cadranel) is still investigating the mysteries surrounding the suicide of Beth Childs (Maslany), including attacks by the religious terrorist “Prolethians.” Meanwhile, Cosima Niehaus (Maslany) is trying to find a cure for the illness afflicting her, before she and other clones die like their sisters before them.

One of the show’s greatest strengths is how it courses with pulp serial energy through different tones,  from sci-fi speculation to police pursuit to the suburban dramedy of worried housewife Alison Hendrix (Maslany). With this rush, however, comes some recycled tropes from the first season that can’t be explained away as plot parallels, or characters acting out of character by not checking on people and things that demand immediate attention. Yet we remain engaged through the many dynamic relationships. Tatiana Maslany provides distinct portrayals for now twelve characters, who sometimes disguise themselves by pretending to be fellow clones. Other surprises arrive through characters like troublemaker Vic (Michael Mando), scientist Scott (Josh Vokey), Alison’s husband Donnie Hendrix (Kristian Bruun), Alison’s musical theater friend Sarah Stubbs (Terra Hazelton). Additional guest stars of note include Patrick J. Adams, Michelle Forbes, and Charlotte Bowles. Michel Huisman’s character Cal is a much more lively love interest for Sarah than Paul (Dylan Bruce), although the latter suffers horrifying humiliation under Rachel — the effects of which aren’t really explored in the following episodes.

The show more or less succeeds in presenting a wider variety of female and LGBT experience (although it could do better with having more active and living characters who aren’t white). The clones cannot trust the authority figures they encounter, such as Dyad’s lead scientist Aldous Leekie (Matt Frewer), who headed the project that created them. Cosima isn’t even sure if she can trust her girlfriend and scientific partner Delphine Cormier (Evelyne Brochu), for despite Delphine’s professed devotion and honesty, she is also Dyad employee ordered to monitor Cosima as a subject. Doubt of authority even continues on rogue scientist Henrik Johansson’s (Peter Outerbridge) Prolethian farm compound. Johansson, who is pursing the clones for his own experiments, exerts control over all those who live on his farm, including his initially faithful daughter Gracie (Zoé De Grand Maison) and henchman Mark Rollins (Ari Millen). Their beliefs are challenged by the capture and arrival of a clone, and thus rebellion begins.

Ultimately, Orphan Black is an imperfect but absorbing drama about people trying to discover and assert themselves within their given, often constraining circumstances.