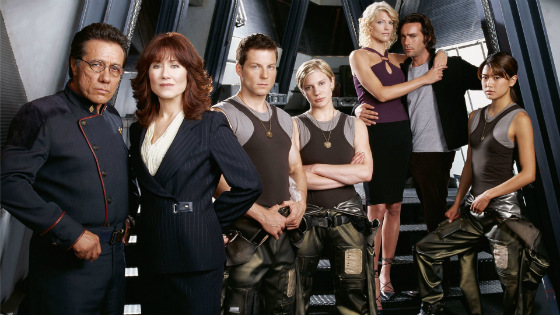 I’m really bad at negotiating, especially when I really want someone to do something, so it’s really no wonder that I got Mob to watch Hana & Alice in exchange [1] for my trying out Battlestar Galactica. Though it’s always bothered me that the show has had 2-part miniseries, TV movies and webisodes in its storyline [1][2][3], I understood the purpose of the two-part miniseries that set the whole show up, and revamped the 1978 version with brand new fist-pumping energy, a few outrage outbreaks and a couple of head-scratchers.

For those of you that have no idea what Battlestar Galactica is about, here’s a recap [Evolution of the Cylon]:

The first season of the show is a pretty straight forward attacked/attacker story, after a Cylon known as Number Six (a super smart, alluring but slightly cuckoo Tricia Helfer) manages to easily gain access to the Twelve Colonies’ (a bunch of planets) security system thanks to the inability to keep-it-in-his-pants of the supposedly-brilliant scientist Gaius Baltar (James Callis), sending a full-blown nuclear attack to the planets killing millions of people. With its defenses torn down, the only ship left standing is the Galactica, which was kept out of the network due to Commander Adama’s (Edward James Olmos) aversion to the idea.

With a little less than 50 thousand survivors and on the run from more imminent attacks from the Cylons, who have already infiltrated the human race with (many copies of ) Cylons who have grown up thinking they’re people until the “switch” finally goes off for them, there’s attempts at keeping society traits such as hierarchic order, democracy under the default presidency of Laura Roslin (Mary McDonnell), and some table-turning as the seasons progress. There’s also religious imagery, hallucinations that will eventually build on the myth and develop the pathos that each character must go through.

Though unnerving at times — just like real life — I really loved the show, despite some of its more annoying or one-note characters like Lee (Jamie Bamber, not even in his FatLee phase), Helo (Tahmoh Penikett), the Chief (Aaron Douglas) and some minor characters. Of course, you can tell someone’s general colors depending on who they were siding with and who they were rooting for- in my case, if you want to know, it was: Humans/Sharon (S1), Starbuck/Number Six (S2), Starbuck/Cylons/Adama (S3). Or anything anti-Gaius, who can be easily describe with a perfect quote from Number Six:

Gaius Baltar is a brilliant, gifted human being. In the time I’ve known him, he’s made a sport out of mendacity and deception. He is narcissistic, feckless, self-centered, and vain. I’m the one who should have stabbed him.

Despite some of his most despicable characteristics, I gotta give it to Callis who is probably the most consistent actor throughout the whole series. He is actually the lead of the show as everything surrounds him, from unwilling fleet scientist to political player to Jesus Baltar religious founder, who physically resembles Jesus but acts and is probably a lot more ridiculous than the founder of the Latter Day Saint movement [1]. He’s my most hated character, but he’s a great actor. Olmos and McDonnell are also great in the roles, especially Olmos giving Adama that hint of warmth and strength to pull off the leader you want to follow through and through, despite some of his more gray decision-making, which all comes through with his friendship with best-friend-forever Colonel Saul Tigh (Michael Hogan). By the end of Season 3 and the “big reveal,” you can’t help but respect the loyal frack that is Tigh.

The rest of the cast is great, and I especially hold a bias for Starbuck and Number Six, but it’s easy to see that Grace Park’s season was the first one, and then takes a sit back to Helfer in the following seasons, while Starbuck’s storyline still leaves me with one of the biggest head-scratches by the end of Season 3, continuing on Season 4.

Galactica, for being a SyFy show, had pretty great production quality, using CGI with good measure as to not overtake from the central idea and not have overblown budgets. The show suffers at times from pacing, especially when they begin explaining all the religion imagery and they go metaphysical on all of us, but the production balances it out with enough adrenaline, drama and some humor. It gets a little emo at times, especially when dealing with Lee’s problems and Starbuck’s not-impossible love affair, but even then the show has enough good elements to overcome it all.

And with this overlong review (which is covering about 50 episodes of the 75 in the show), I’m recommending this to all of you. It’s worth it, even if the last season is a bit of a hit-or-miss.