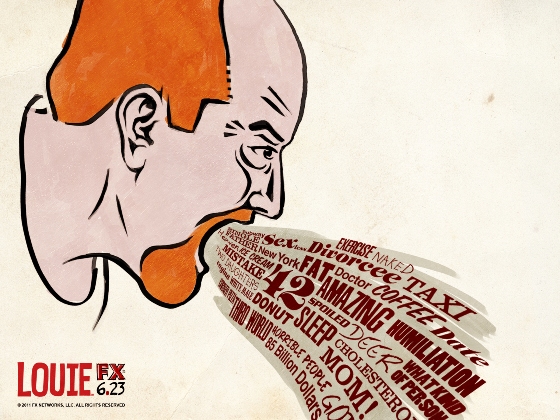 Season 2 of FX’s Louie continues with Louie (Louis C.K.) doing the same things from Season 1: his stand-up work, raising his daughters and dealing with daily life situations. At the same time, Louie is trying to figure out what to do with his life, which leads him to ask a few questions about himself.

Louie still remains the one-man show with Louis C.K. in complete creative control. Season 2 keeps the brutal honesty from Season 1 intact, but now highlights dramatic, darker and depressing moments more often. However, Louis C.K. mastered the art of executing heartfelt moments this season and blends the light and dark aspects on Louie in brilliant fashion, building up the laughs slowly until the climax of an episode. Who knew that a small, innocent duckling could unite Americans and Afghans as friends?

“You do it because we love it more than anything else. That’s why you’re doing it. If you want a real job there are a million things you can do. What we do is not a job. It sounds so stupid. What we do is a calling, my dear. We make people happy. It’s a calling.”

Louie made great use of its guest stars — the better known guests includes Joan Rivers, Dane Cook, Chris Rock, Academy Award winner F. Murray Abraham (Amadeus) and Pamela Adlon (Californication). Rivers was used to make Louie not quit his job and appreciate what he has in life — all done in a way that mirrors the Joan Rivers: A Piece of Work documentary by exploring the crisis that stand-up comedians suffer at times. As for Cook’s appearance, you have to admit he’s got balls to guest star on Louie and confess to stealing jokes from Louis C.K. — I guess both men buried the hatchet. The appearances from F. Murray Abraham and Chris Rock were brief, but they helped to set up the final scene of Season 2 involving Pamela and Louie’s “will they or won’t they” relationship.

However, Pamela Adlon’s guest appearances provide some continuity to the show and her chemistry with Louis C.K. is amazing, bringing out some of the most romantic, funny and depressing moments. The final scene between both of them made me shed a tear as they drift apart in a heartbreaking way to close Season 2.

Overall, Louie is still not an easy show to watch due to its unorthodox approach towards comedy and drama as well as putting the main character through plenty of depressing moments and the occasional shining light of happiness. However, it might be the best comedy show out there thanks to its solid acting, great use of music during pivotal scenes, powerful moments and smart writing that bring a very organic feel to the show.