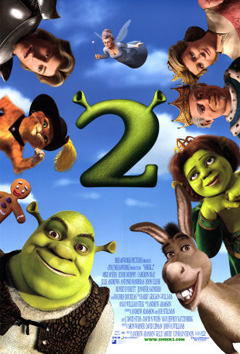 The first Shrek film became a huge critical and commercial success that led Dreamworks into creating Shrek 2, the sequel film.

Shrek 2 follows recently married ogres Shrek and Fiona. They receive an invitation from Fiona’s parents, King Harold (Cleese) and Queen Lillian (Andrews), to a royal ball to celebrate their marriage. Despite Shrek being reluctant to attend, the couple part to Far Far Away along with Donkey. As Shrek expected, things didn’t go well as he and the King do not get along and tension start to develop between Shrek and Fiona. Later on, Shrek reads Fiona’s diary and learns something about Fiona’s past that ends with him wanting to make a change for himself.

Little did the ogres knew that in the past, Harold had a deal with the Fairy Godmother (Saunders) that involved arranging a wedding between Fiona and Prince Charming (Everett), who was seen earlier in the film’s backstory. Now that Shrek ruined his plans, Harold resorts to the Fairy Godmother, Prince Charming and a feline assassin called “Puss in Boots” (Banderas) to get rid of Shrek and set things up for his best interests.

Shrek 2 is different than the previous film. This time, we see Shrek in human form (Donkey also changes into a white stallion) thanks to a magic potion, we’re introduced to the Puss in Boots character that will appear in later Shrek films – and gets a film of his own in a few months, among other things. But the most notable change is that a good portion of the humor in Shrek 2 derives from pop culture references rather than fairy tale characters, which can make this film a hit or miss for those who really loved the first Shrek film.

It’s hard for a sequel film to surpass a great film. Yet, Shrek 2 still manages to retain successfully the charm that made the first Shrek film entertaining and worth the watch. The Puss in Boots character is an welcome addition to the list of Shrek characters and Antonio Banderas – who also provides his voice for Puss in the Mexican-Spanish dub – can give Eddie Murphy a run for his money in stealing the show. Shrek 2 also has a better antagonist in the Fairy Godmother and the humor still works very well along with the story, the voice acting and the details that can enhance the story and comedy aspects.