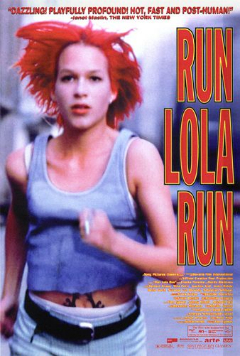 There’s a scene in The Curious Case of Benjamin Button that involves Benjamin’s narration of Daisy’s unfortunate car accident. He explains every facet of the chain of events leading up to the moment that Daisy is hit by the taxi. The moment reminds us that every situation is the product of a web of related actions and different choices made by different people. It’s mind-blowing because the statement itself is counterintuitive, but the impact never loses its power. Run Lola Run is an 80 minute version of this reminder.

Franka Potente plays Lola, a young woman whose relationship with her boyfriend, Manni, seems to be a bit shaky. Manni works as a messenger boy in a shady business under a boss who is overly abusive and trusts no one.

During a business deal, Manni runs into a homeless man that has fallen down on the metro. After helping the man, Manni reflexively exists the train at the next stop, forgetting the money on the bench. By the time he realizes that he forgot the money, some security officers stop him and the train leaves the station. Manni has officially lost 100,000 DM and his boss will kill him.

In order to prove her devotion (and save Manni’s life), Lola promises to acquire 100,000 DM in twenty minutes to prevent Manni from following through with his plan B — robbing the nearest supermarket.

We are taken through three possible outcomes each ending with the death of a character of importance. Lola’s first instinct is to ask her father for the money. He works at the bank so it would appear to be a simple exchange. However, as the fates would have it, her father is in the middle of an interaction with a coworker that he’s been having an affair with so things are already tense to begin with. The encounter with her father acts as a sort of train track switch-point guiding the entire course of events depending on the exact time that Lola finds him during his conversation.

I must say that the most daunting element of this movie for me was the lack of communication. Cell phones weren’t super popular just yet so the only time that Lola and Manni were able to talk to each other was in the very beginning when Lola was at home and Manni called her from a phone booth. Things would’ve been much easier had the two of them owned cellphones but I suppose that takes the fun out of it. Lola and Manni had to rely on bare commitment; that’s beautiful.

In what is truly Tykwer tradition, Run Lola Run is full of quick camera work, split-screen story progressions, and a fitting techno soundtrack. Lola’s outfit is pretty awesome and Manni sports this cool vest-jacket thing that reminds me that this movie is over 12 years old which makes it quite the spectacle. The film’s pace kept me in a state of constant anxiety, so if you’re okay with having mini heart attacks then this is the movie for you and I mean that in the best way possible. Oh, and that hair. I couldn’t help but think of Milla Jovovich’s Lilo from The Fifth Element.

Although it is ultimately the decisions that Manni and Lola make that drive the progression, it isn’t until they let go and rely on chance that things begin to fall into place.