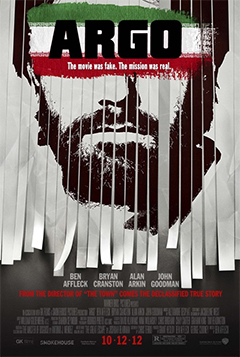 From its very start, which details the beginning of a hostage crisis between Iran and the United States in 1979 through animated storyboard sketches for anyone who didn’t pay attention in their history class, Argo wraps its hands around your neck and doesn’t let go for the next two hours.

During the invasion and hostage situation of the embassy in Tehran, six Americans manage to flee the building and find safety in the home of the Canadian ambassador. With time running out before Iran finds their missing hostages, the CIA hastily constructs a plan to retrieve their citizens.

With only bad options presented to them, Tony Mendez (Ben Affleck) comes up with the best bad idea of the bunch. Through an elaborate ruse featuring Hollywood big shots and the US government, Mendez and the six fugitives claim they are a Canadian film crew in Iran scouting locations for a sci-fi epic by the name of Argo.

Upon hearing this plan, many might find themselves thinking they’re in for a comedy, but do not be fooled. Argo is primarily a drama and thriller. Every minute spent in Iran is a minute that leads closer to the Americans getting caught or escaping, and each precious moment is utilized expertly by either progressing the narrative or simply building suspense.

It’s safe to say that Ben Affleck has come a very long way since his Gigli days, and this proves to be even a big step up from both Gone Baby Gone and The Town. Not only does he deliver a solid lead performance, but with Argo, Affleck delivers his best directorial effort to date. Although the finale may be spoiled for those familiar with the historical events, Affleck and writer Chris Terrio work together to bring forth a narrative that’s compelling, tense, and even pretty damn funny.

Any worries I had going into the film were quickly dispelled. Even my hesitation about the film’s characterizations of non-American characters was addressed, as the filmmakers take great care not to make anyone into a big bad monster. Both the writing and clever use of archival footage demonstrate that both Americans and Iranians alike had people who helped, people who suffered, and people who wreaked havoc.

Writing and directing aren’t the only things that Argo excels in, as a great movie is built on more than just that. The entire cast pumps out solid to great performances with the most notable work coming from Alan Arkin as the fake film’s producer, John Goodman as make-up artist John Chambers, and Bryan Cranston as Mendez’s boss at the CIA.

The crew also does an excellent job of crafting the film’s setting, putting much work into recreating the late seventies aesthetics. Impressive costume and production design complement the film’s mostly historically accurate writing, and even Alexandre Desplat’s moody score seems to fit in just right.

Proving to be one of the most likely films so far this year to score an Oscar nomination for Best Picture, Argo is not only an extremely well-executed thriller, but a film that’s sure to please and enthrall any crowd.