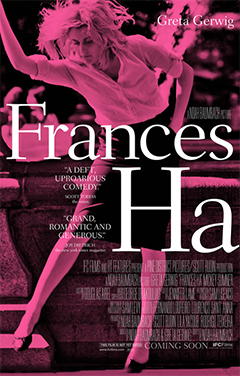 For all the beauty of the black and white photography in his latest film, love is proving to be a very nice color for Noah Baumbach. No doubt in great part to Greta Gerwig’s influence his life, Frances Ha proves to be his sweetest and most entertaining film to date.

Frances Ha opens with a series of little events between best friends Frances (Gerwig) and Sophie (Sumner). While Sophie’s life is in order and she prepares to move into a new apartment, Frances is stuck. She’s still in a post-college angst of sorts, she’s working as an apprentice at a dance studio, she’s just been left by her boyfriend, and she’s  losing her best friend. Even when people tell her she has the potential for me, her utter lack of ambition or self-reliance are her downfall. For all her faults however, Frances keeps going and it’s that journey to reaching some semblance of a dream that Frances Ha chronicles.

Stylistically speaking, Noah Baumbach dives into depths he hasn’t always gone for. There’s a touch of Woody Allen in the humor and the beauty of New York and Paris (and even Sacramento), but nothing is quite as blatant as the love for French cinema present here. Great influence comes from the films of the French New Wave, and even stretches off into the eighties, with Leos Carax’s Mauvais Sang being a clear inspiration for Gerwig sprinting down the streets of New York to Bowie’s Modern Love. And it’s that song that hits just the right note in relation to Frances Ha, because it really is a film all about modern love. Baumbach’s love for Gerwig shines through in that everything is tailored perfectly to make one feel for Frances and how much love she has for Sophie, and eventually herself.

So much of the dialogue in Frances Ha is catered to explaining Frances as a person and how she feels about herself. She practically can’t function without another person and once Sophie leaves her, she moves from friend group to friend group trying to find a way to get along. One recurring line that Frances has about how Sophie is the same person as she is really reveals that reliance and it’s a clear signal that in order to grow as a person she needs to learn to rely on herself instead of someone she sees as herself. Frances knows she has to do this, and one of the film’s most powerful quotes about what Frances wants from a relationship echoes through the film right til the very end, where the relationship that needed the most work was the one with herself that she never thought she needed to work on.

“Don’t treat me like a four hour brunch friend!” Frances yells at Sophie, but in part she knows that she’s only angry because she treats herself in the same manner. She’s “undateable,” as a friend calls her, because she hasn’t fully realized her own potential. She’s letting herself down again and again until she realizes she needs to love herself. The final loss of Sophie after one last night together is what triggers that and it comes together in a little piece of original modern dance that’s plenty amusing to watch, but all the same a surprisingly emotional experience for anyone who’s ever felt stuck and unable to believe in themselves.

It’s that life-affirming quality that separates Frances Ha from anything Noah Baumbach has ever done, and so much of this is because of Greta Gerwig. She’s always delightful to watch, from Damsels in Distress to even Arthur, and she embraces comedy in all of its glory. The physical stunts are just as entertaining as the witticisms that come out of every character’s mouth, further giving the film that good old, sometimes awkward, Woody Allen quality. It isn’t only her acting that makes the film, as her writing complements Baumbach’s naturalism perfectly, reinforcing the beautiful heart of the movie. You can see she doesn’t take herself too seriously and refuses to sugarcoat life for the sake of comedy, which is exactly why it does such a fine job at capturing what it’s like to be a young woman in your twenties discovering yourself.

To some, Frances Ha won’t be anything special, simply bringing up endless and misguided comparisons to Lena Dunham’s satirical Girls. To others, Noah Baumbach’s latest will be a bit of an inspiration. It’s an entertaining film that genuinely cares about the woman it’s exploring, for her all flaws, and it shows that success often comes from working on and loving the one person that you never really think about loving.