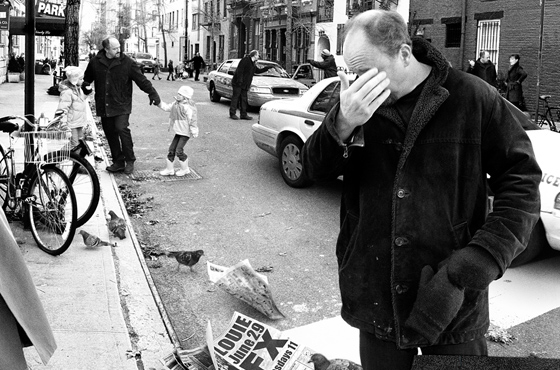 I finally decided to check out FX’s Louie after hearing many good things about it — including the fact that Louis C.K. earned two nominations for Outstanding Lead Actor in a Comedy Series and Outstanding Writing for a Comedy Series for the 2011 Emmy Awards. I really wished I could have watched Louie before because it’s worth it.

Louis C.K. stars as Louie, a character loosely based on himself, who is shown as a stand-up comedian and a newly divorced father of two girls living in New York City, going through the daily situations people face in their lives.

Watching Louie, I couldn’t help but notice that Louis C.K. seems somewhat influenced by Larry David. The show reminds me of Seinfeld because of the structure used in every episode — stand-up comedy acts intertwined with scenes showing Louie’s life and the situations he deals with. However, it’s closer to Curb Your Enthusiasm with its explicit content [see: morality, child abuse, religion, etc.] as well as the near-absence of fictional continuity.

Louie differs from Curb because it has a dark tone to it, but you don’t see Louie getting his ass kicked by karma most of the time. The show also makes it seem like you’ve learned a life lesson after an episode is over, despite Louie’s self-proclaimed goals consisting of raising his kids and holding the “World’s Best Masturbator” title.

Louie works very well thanks to Louis C.K. himself — he created the show all by himself, and serves as the writer, director, editor, producer and star of the show with no interference from FX. For a stand-up comedian, Louis C.K. comes across as a well-crafted actor in Louie, delivering the goods consistently thanks to great, funny and sincere interactions with the rest of the characters and other stand-up comedians seen in the show, all properly casted.

Despite the show’s low budget (US$ 200,000 per episode), Louie boasted guest stars such as Ricky Gervais, Stephen Root, Bobby Cannavale, Matthew Broderick and Pamela Adlon (Californication); the latter also serves as the Consulting Producer for the show.

Overall, Louie is not a show for everyone because of its dark tone and the subjects the show tackles. However, if you enjoy comedy, then give this a shot because it feels realistic and it’s easily one of the best comedy shows out there nowadays.