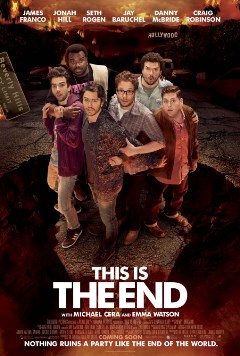 What works for short films doesn’t always mean it should also work for feature films. And that’s exactly what happened with This Is The End, whose premise showcases real-life celebrities dealing with the aftermath of the Apocalypse.

Based on the short film Jay and Seth versus the Apocalypse, which starred Jay Baruchel and Seth Rogen, This Is The End is pretty much a bigger and expanded version of said short film and follows Jay Baruchel and Seth Rogen who reunite after quite some time and decide to attend James Franco’s party at his recently purchased house. As you would expect from the party, drugs, booze, sex and other kinds of acts are taking place. However, a weird chain of events that resembles the Apocalypse starts to take place and then we’re left with Jay, Seth and James trapped at the house along with Craig Robinson, Jonah Hill and Danny McBride. Will they survive the Apocalypse or not?

With the cast involved, you would think you’re guaranteed a lot of laughs, but that wasn’t the case for me unfortunately with this film. I know people may have problems with the main cast coming across as self-indulging assholes, but that comes with the territory of self-parody. What is really unforgivable, however, is the lack of creativity regarding the comedy value within most of the main cast and that made This Is The End feel like a chore to watch for almost a good amount of its running time, and that’s pretty disappointing when you consider that most of them are usually funny in their previous projects.

The main appeal of the film is the celebrities that show up here and This Is The End shows them partying and dying as well as seeing them dealing with the chaotic aftermath. The film had some interesting things to notice, such as the idea that celebrities don’t always like each other and they can be lousy people too. Most of the deaths weren’t great or funny to watch at all — the effects being awful didn’t help really (this would be forgiveable if the film was funny, which it wasn’t)… except for one death that happened near the end of the film which involved cannibalism and a Constantine reference. Micahel Cera was the most unlikeable of the entire bunch in his few minutes of screentime while Emma Watson’s cameo was actually funny (but you already knew that thanks to the second trailer).

If you’re thinking about having a good time watching celebrities playing as themselves in This Is The End, I prefer suggesting the television media since the celebrity self-parody concept is better executed (and funnier) with the likes of Seinfeld, Curb Your Enthusiasm, Louie [1,2,3] and Episodes [1,2]. Other than Jay Baruchel as the wet-blanket protagonist who had his share of internal problems and Danny McBride as the film’s sort-of main antagonist, no one else stood out in This Is The End.