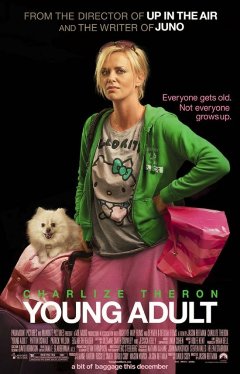 Jason Reitman and Diablo Cody, who previously worked together in Juno and Jennifer’s Body, join forces once again in Young Adult, a dramedy film that examines prolonged adolescence in adults.

Young Adult follows Mavis Gary (Theron), a 37-year-old ghost writer working on the Waverly Prep series of young adult novels, who is on a deadline with her editor to finish the last book of the soon-to-be-canceled series. When she recieves an email with pictures of the newborn daughter of her high school boyfriend Buddy Slade (Wilson) and his wife Beth (Reaser), Mavis takes it upon herself and returns to her hometown to claim Buddy as her man.

While Jason Reitman serves as Young Adult‘s director, I have to say that the film almost felt like a 100% Diablo Cody product. There is a sense of maturity and honesty to her screenplay that makes you wonder if Young Adult could serve as her autobiography. Cody’s previous works — including United States of Tara — had the main characters pegged with problems, insecurities, quirkiness and wondering about their existence in life. To a certain extent, Mavis Gary is no different than Cody’s previous characters — her starting and finishing point are almost similar to the Juno MacGuff character played by Ellen Page. But unlike Juno, Mavis Gary is a lot more interesting to watch because of the environment she’s placed in and the people she has to deal with.

At first, Young Adult presents her as a lazy ass bitch who lives her life carelessly and spends most of her time being silly, drinking, playing video games, struggling at work and clinging on to her past. But later on, Jason Reitman directs the film into darker territory as Mavis painfully realizes that everyone has grown up and moved on with their lives. During her visit, she wants to grow up like the rest and leave her past issues. However, her Peter Pan complex prevents her from doing so, leading her into sadness and trying to find truth in life. But she isn’t alone in this: Matt (Oswalt), one of Mavis’ former classmates, hasn’t gotten over the past quite yet.

Theron’s performance as Mavis Gary is raw and outstanding, making Mavis a very relatable character. She flawlessly guides you through the issues Mavis faces, her views about life and even lets you feel sympathy for her despite the fact that Mavis comes across as an unlikeable character during a good chunk of the film. It’s a crime that Theron wasn’t nominated for Best Actress at the Oscars.

While the rest of the cast played their parts alright, Patton Oswalt was great as Matt and provided most of the laughs in the film. Matt is the geeky guy that people like Mavis would ignore back then, yet he was the only one able to understand and cope with her problems. Matt and Mavis are an odd couple, considering their differences and similarities, but the chemistry between Theron and Oswalt is top-notch and drives Young Adult to be a great film that disguises pain in comedy while bringing out real life issues without sugarcoating them.