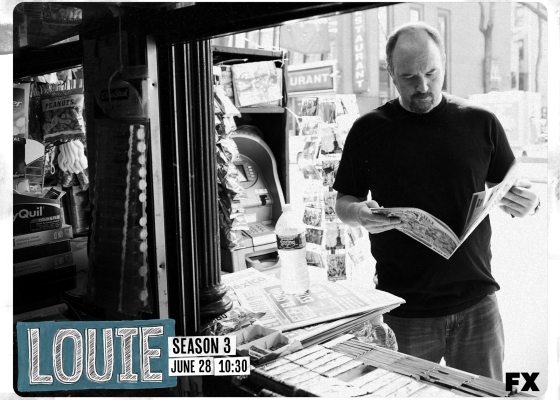 After a near-perfect Season 2, which put Louis C.K. into a big spotlight after the 2012 Emmy Awards, my biggest concern with Louie in its third season was that Louis C.K., as talented as he is, wouldn’t be capable of topping that season. Don’t get me wrong, Season 3 (which earned Louis C.K. his first Golden Globe nomination) was nothing short of being a very solid season and it had its share of excellent moments while also being pretty diverse and experimental regarding its approach to different subjects. As a whole, it’s just barely below Season 1 and 2, but still outstanding nonetheless.

Unlike the past two seasons that veered with non-linear storylines and multiple situations, Season 3 focuses on Louis C.K.’s (himself) loneliness and how he deals with it. While he’s still raising his daughters Lilly (Hadley Delany) and Jane (Ursula Parker) as well as working out his stand-up comedy routine shows (which are absent in certain episodes along with the intro), he also ends up dating several women… damaged, flawed (yet funny) women, that is. Among those dates, the ones that stood out the most this season were an akwardly hilarious blind date with Laurie (Leo) and a budding relationship with local bookstore worker Liz (Posey). While Leo’s guest star stint was downright hilarious and Emmy-worthy, Posey’s character (also Emmy-worthy) had as much screentime as Pamela Adlon’s character from the first two seasons and made Louis C.K. realize that he doesn’t want to end up being lonely and ends up dating her. The loneliness subject is addressed later on throughout Season 3, whenever it is through conversation with friends or spending time with his daughters.

By the way, we get to see new characters being part of C.K.’s everday life. There’s his teenage-looking agent Doug (Edward Gelbinovich) and his black ex-wife (Susan Kelechi Watson). While the former helps hm out on handling his career/management stuff and serves as a way to blur the lines between fiction and reality on Louie, the latter works as a nice addition to the show because she’s not written to be an obligatory antagonistic character like it would happen on other tv shows.

Loneliness wasn’t the only thing that was a ongoing thing in Season 3. A couple of storylines ended up having more than one episode dedicated towards their development. One of them was the relationship with Liz (Daddy’s Girlfriend Part 1 & 2) and the other one — Season 3’s biggest hit — was the 3-part Late Night episodes. Late Night masterfully explored the temptative idea of how Louis C.K. could make it big in Hollywood and it went into Rocky territory, but it had lots of heart, drama and tension to make it worth the watch and a reason to watch Season 3. The resolution to that storyline was  both a happy and sad thing, but it works very well because it doesn’t require a very drastic change for Season 4 — set to premiere around May 2014 — if it was resolved in a conventional matter.

Despite Louis C.K. being excellent at wandering through loneliness, father-daughter experiences, working and dating, Season 3’s middle portion — inbetween the Liz and Late Night storylines — felt pretty uneven to watch. Weak spots includes having Louis C.K. revisit the Dolores (Maria Dizzia) character from Season 2 (which wasn’t all that fun), the Barney/Never episode which had that annoying Never kid, and an uneven tone within its dramedy aspects and subtleties as well as the loneliness aspects being sometimes way too depressing to watch (even if Louie is already a depressive show in its own ways).

All in all, Louis C.K. is still great with his own tv show and his voice and mind deserved to be paid attention to. He’s already neck-for-neck with Larry David for best comedians in the world as it stands right now.