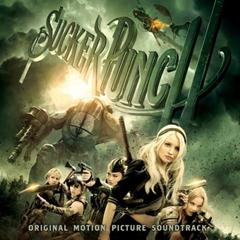 Most of the time, films use music to fill in awkward gaps in dialogue, or for random mash-up scenes that are meant to pull on your emotional heart strings. Sucker Punch used the music to tell the story. I was so drawn into it I had to pick up the soundtrack as soon as possible after watching the film. I was happily surprised to find that Emily Browning, who plays the main character Baby Doll, actually sings for three of the songs on the album. Also, Love Is The Drug is performed by Carla Gugino and Oscar Isaac, who also star in the movie. If I didn’t know better, I’d think Sucker Punch was meant to be a musical, but they ran out of time.

Musically, the soundtrack is very dark. It has an industrial edge to most of the songs, while those that don’t are very quiet and haunting.  The opening song Sweet Dreams (Are Made Of This) really sets the tone for the film and the soundtrack. Because it starts off slow and gradually builds until it is a full, hard industrial song it gives the audience an idea of what to expect from the film and the music. Sweet Dreams is actually sung by the star of the film, Emily Browning, and surprisingly enough she’s really quite good. Then we move along to Army of Me a remix of a Bjork song made especially for the movie. I love the darkness in this song; however, I get a little tired of Bjork screaming towards the end of the song. Where is My Mind? is also a remake of an original song written by the Pixies, but performed by Romanian songster Yoav. This is a remix of his version from his 2008 album Charmed & Strange featuring Emily Browning. It’s a peaceful yet mildly haunting song.

The song that really stood out to me is Asleep. A quiet, acoustic song by Emily Browning that if you listen to the lyrics, fits really well with the end of the film. Listening to the lyrics really brought more sense to the film to me. I won’t give it away, though, since people have yet to see Sucker Punch. I can see me adding this to my relaxing playlist on my mp3 player. And, of course, who can forget the showtune Love Is The Drug performed at the end of the film by Carla Gugino and Oscar Isaac? The song is a throw-back to old cabaret songs and the video reminds me of Moulin Rouge.

Sometimes, a soundtrack can make or break a film. In this case, it made the film. Without the power of the music, Sucker Punch wouldn’t have been nearly as good.

Preview on Xiami.com | Buy on Amazon