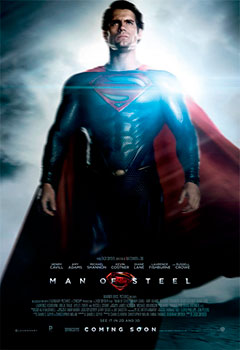 Man of Steel is a very good origin story. Not great, but very good indeed.

It starts with Superman being born. Of course he was Kal-El back then. He is born as the incompetence of the leaders of Krypton has let it to its imminent destruction and in the middle of General Zod’s coup d’état. His parents spirit him away on a spaceship towards Earth with the hope that he can create a new Krypton and also help humankind better itself. Suddenly we have an adult Kal-El, or rather Clark Kent, doing good deeds and trying to keep a low profile. But now General Zod is here and plans to use Kal-El to create a new Krypton here on Earth by totally eradicating the humans. Our hero is not OK with that.

Henry Cavill did an adequate job as Superman. He certainly looked the part and, despite what some promo pictures showed, he looked kind-faced most of the time. Here we are shown Clark Kent as a good man, who struggles to control himself when confronted with the assholes of the world. But he manages even if he’s not above some non-bodily harmful revenge. He acted so very human and that was awesome. That’s all thanks to the Kents. Costner and Lane were excellent as Clark Kent’s parents, specially Costner talking to kid Clark about how he’s meant for greater things so he has to protect his secret until he’s ready. By the way, all of Clark’s backstory growing up is told in flashbacks, which was well done and interesting.

Superman’s other set of parents were also great. The few moments of Zurer as Lara were very poignant as a new mother having to let his newborn go so he may have a future. Crowe was a more stoic parent as Jor-El, and his uploaded conscience acted more like a mentor than a father, but that’s what you expect for the role.

Then there was Lois Lane. Despite that Amy Adams didn’t look as we are used to Lois Lane looking (we get ginger Lois!), she did channel all her intrepid reporter attitude here. Also, she was useful. While Lois has always been a proactive woman, she also always fell into the Damsel in Distress trope. But in Man of Steel Adams’ Lois helped Superman (and the humanity by default), and even had a nice team-up with virtual Jor-El, even she also have to be rescued more than a couple of times.

The other important humans were Lois’ boss and workmates from The Daily Planet, and from them it was Fishburne as Perry White who stood up. He acted not only like a boss but as a mentor, and you could clearly see how much he cared for them.

Of course there were also the military personnel, with their own scientist included. They also did a good job at helping Superman save humanity.

On the other hand we had the bad guys. Mostly Shannon as General Zod and Traue as Faora. The later was quite the formidable warrior and she had a bit of a biff with Meloni’s Colonel Hardy. But of course, the main villain was Zod, who could be as terrifying as he was hammy. His intentions were not evil per se, but the way he went about them clearly was. And his power-ups were very interesting to watch.

That brings us to the topic of especial effects. I’m surprised by how much Krypton we saw. It was a nice piece of world-building and it showcased how alien they were despite them looking basically like us. The other great effect was Superman’s flight and how joyful he looked when he finally managed to do it. And then there was the awaited Zod fight, which while visually stunning felt too long. But also made me think we are technologically ready for a Dragon Ball Z live action. But too much style and flashiness is indeed Zack Snyder’s trademark. Because whatever some have expected, this is indeed Snyder’s baby and Nolan was only the deadbeat parent who only sees his kid once in a while.

That said, I must also mention the soundtrack, which is awesome. Hans Zimmer is not John Williams, but he doesn’t have to be. His soundtrack may be more ominous but is as epic as the one we are used to.

Finally, the movie was not that subtle about the Jesus Christ comparisons and of course had to remind us that Superman is American. BTW, I know I call him Superman a lot but that name is only mentioned once. He is mostly either Clark or Kal-El.

After this, we are so getting a sequel and a Justice League movie.