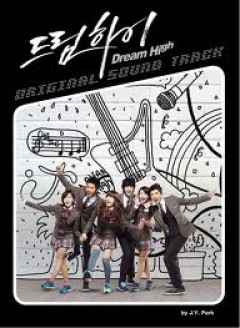 Now, this to me is what you call an OST! I can’t even begin to explain how many times I have listened to this since the drama ended. Not that it helps me relive the awesome that was Dream High much, but because this is a very well balanced pop album.

What I love about the songs is that they were created to be a part of the drama itself. The lyrics and the melodies represented certain scenes/characters. So every song has a deeper meaning beyond the song itself.

The songs vary from ballads, mid-tempo songs, to a dance track. In it, showcasing a great mix that is not burdensome, there is an energy in the OST that is light and cheerful.

Most outstanding thing on the OST is the fact that it used almost all of its cast to sing the songs. A very nice surprise is the solo by Soo Hyun Kim, Dreaming. He is proving to be the kind of actor that can really sing.

The only negative thing about this OST is the fact that Wooyoung (one of the lead singers of 2PM) didn’t get one song. JYP, what were you thinking? Oh! Another negative thing: there is not a duet between Wooyoung and IU — who played the roles of Jason and Pilsuk. JYP you are failing me! But I will forgive you if you give me a special OST consisting of only duets from the cast *cough*

Preview on Xiami.com | Like it? Buy the album on YesAsia.com | iTunes