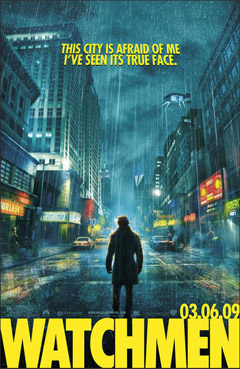 I was really excited about this movie and it lived up to my expectations and then some. I read the books a few years back and while I am a fan of Alan Moore, and it is certainly a thoughtful and complex work, the original graphic novel left me a little cold. I respect it and enjoyed it, but it was more of a detached fascination then any real affection for the characters.

It’s basically a deconstruction of the very idea of superheroes. Those wacky characters that dress up in long underwear and put on silly masks, then proceed to go out in public and fight crime. It asks the question, what would have happened to our “real” world if these yahoos really existed and how might these heroes really go about saving the world? It takes a silly idea that has stood the test of time and plants it firmly under the microscope that is gritty, slo-mo, cinematic reality circa 1985, at a time where Nixon is still in office and the Cold War has escalated to the point where America is on the brink of all out nuclear war with Russia.

This movie is basically the book in motion. I think Zach Snyder did a superb job of translating the concept and themes of the book while picking a great assembled cast of lesser known actors to really bring it to life in a way I thought enhanced the experience of the book. There have been people that feel it even stayed too close to the book, but if that is all people are complaining about, I think we lucked out, and who really cares if the squid got cut or not? (keep an eye out as it does make a kinda sorta cameo)

Good performances by all involved, but standouts include Patrick Wilson as Night Owl, Jackie Earle Haley as Rorschach, Billy Crudup as Dr. Manhattan and Jeffrey Dean Morgan as the Comedian.

In my humble opinion, a far superior movie to a certain pointy eared vigilantes recent gloomy escapades and well worth checking out.