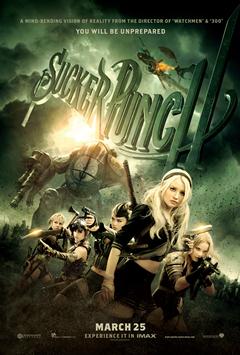 When 20-year-old Baby Doll loses her mother she knows instantly that she has to protect herself and her little sister from their stepfather. But things don’t go as planned: Baby Doll’s sister is dead, she has a gun in her hand and her stepfather winds up committing her to a mental institution. Upon her arrival at the facility, her stepfather underhandedly has her signed up for a lobotomy. It’s immediately clear that the institution is run by corrupt handlers and Baby Doll begins her plans to escape.  She uses her imagination to escape the reality forced upon her, depending on her strong imagination to lead her through the challenges that lie ahead.

Sucker Punch is a movie with so much imagery and metaphor that it’s possible for an unprepared viewer to get lost. One thing that is for sure, Zach Snyder has provided us with another visual feast. Some directors get cursed by previous films, this might be the case with Snyder. People were expecting exactly the same film as 300 or Watchmen. But Sucker Punch is its own type of film. It’s a fantasy film first and foremost, but it’s also part musical. Without the soundtrack, this movie wouldn’t have made as big of an impact. The opening scene is set to a beautiful rendition of Sweet Dreams (Are Made Of This) that switches from quietly haunting to industrial and powerful as the scene unfolds. I was hooked. I don’t think I’ve seen a movie lately that grabbed me so entirely right off the bat.

People who are saying that the story line is weak have obviously forgotten what it’s like to be an adolescent, where escapism becomes part of an everyday reality. I think it’s this connection to the main character that makes her so endearing to the audience, knowing that at some point we all want to close our eyes and run away to a world that we control (that just might be filled with dragons, giant, fighting samurai statues, and all of our best friends fighting beside us.) It also deserves notice that Snyder was forced to cut much of the film out to receive the PG-13 rating, much to his disappointment. He’s quoted as being currently in production on the director’s cut DVD/Blu-Ray. I can’t wait, because it was noticeable that there were parts left out, but not enough to really affect my opinion of the movie.

At it’s deepest core, this movie is about empowerment.  Baby Doll takes an impossible situation and grabs the bull by the proverbial horns by not giving up or giving in. She puts up a good fight too. You’ll have to watch the film to see if it pays off. If you have any interest in seeing this movie, I suggest seeing it now while it’s in the theater, it won’t be the same at home on the small screen.