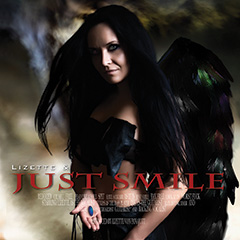 Industrial Rock. It is a genre that you normally don’t hear that much of when you put on your normal radio station, and therefore Lizette & will function as a fresh breeze in your everyday ear when you have tired of listening to mainstream rock music.

The sound of Lizette & album Smile is new, experimental and exiting. Lizette has a lovely voice, and it’s almost like she is having an angel on her left shoulder and a little devil on her right, and they decide when she is going to sing peacefully or trashy rocky. I must say that I like the devil in her more.

The best songs on this album is definitely the high tempo once, like Have A Cigar and Taxfree, because the slow songs like Spit just feels kind of dull and gets a little boring. Frankly I have to say that I didn’t fully understand the meaning of a song like Worst Fuck on an album like this, bonus track or not, that song belongs more on a Lily Allen album and not on an industrial rock album like this one.

Like I said before, Lizette has a great voice, but the music seems to be circulated too much on her and the band behind her don’t get the focus they should have. A little more presences of the band would boost their music to another level and the overall experience of the album would be a lot better.

But, all in all, it is a good rock album with a few surprises along the way. I might not agree that Smile is dynamic and that it leaves a mark like they do on their website, but it is an interesting album that I guess will work for their fans and to new industrial rock lovers.