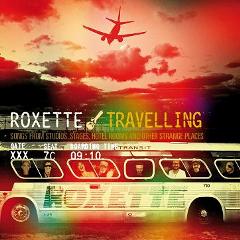 Roxette’s Travelling is the follow-up to last year’s comeback album, Charm School, which led the band back to touring the world once again — by the way, I’m seeing them live today.

Travelling, touted as the official sequel to 1992’s Tourism, features a mixture of new songs, live recordings and updated versions of old songs. Opening track Me & You & Terry & Julie quickly references Tourism‘s opening track How Do You Do when Marie Frediksson bursts into the chorus as she asks, “But how about you?” Touched by the Hand of God briefly namedrops Charm School while the song’s chorus seems to be Marie’s way of being thankful for beating her brain tumor years ago.

Unlike Charm School, which was Roxette’s attempt at regaining their old sound that started quite good and then ended with a weak second half, Travelling is more effective at accomplishing Charm School‘s goal while also showing a more mature and relaxed side of Roxette in its pacing, lyrics and sound.

Marie and Per deal with ballads (Turn of the Tide, Angel Passsing) pop songs (Lover, Lover, Lover and Easy Way Out) and pop/rock songs; the latter is where Roxette excels best with the upbeat and catchy It’s Possible (both versions are great) and Touched by the Hand of God. One of my favorite tracks is the romantic-sounding Lover, Lover, Lover, which is an excellent, chilling song thanks to the arrangement and Per’s vocals. However, the ballads can be either hit or miss. While Marie sings Perfect Excuse better than Per did on his third English solo album Party Crasher, Angel Passing is, unfortunately, boring.

The last third of the album deals with past material from the band. It might feel like a copout for casual music fans since Travelling is nearly two-thirds new material, which is more than Tourism showed. But the orchestra-backed version of It Must Have Been Love — despite the song being overplayed to death — is noteworthy since it marked Roxette’s return with a healthier Marie on the vocals.

Overall, Travelling may not be as masterful as their past albums Look Sharp! and Joyride. But Travelling is a pretty good album for most diehard Roxette fans, sounds more focused than Tourism (which was a filler album riding on their fame back then) and it should have been the comeback album instead of Charm School.

Preview on Xiami.com | Like it? Buy the album on Amazon | iTunes