It’s not a big secret that one of my favorite genres is rock and Mustasch is a Swedish rock band from Gothenburg who plays just the type of rock that I usually like: hard, pretty fast, heavy type of rock music with their charismatic vocalist Ralf leading the experienced band. Logically, I should like Mustasch, but unfortunately I’m not that into the band. 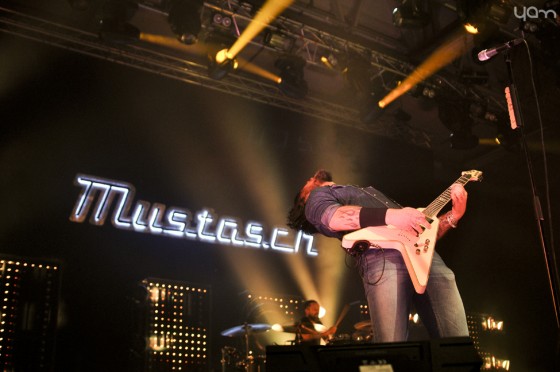 This night, they were playing at one of the arenas close to the big Globe arena in Stockholm. They have just released a fresh album, Sounds Like Hell, Looks Like Heaven — the name of the album pretty much sums up my opinion of the album as well.

We were about eight photographers following the Mustasch show that cold night, and that was quite a bit. As a reference, we were only six following Rihanna when she visited Stockholm.

As we entered the arena, it struck me that more fans seemed to be crowding in front of the bar instead of in front of the stage. I guess that they were as surprised as I was when the band started at the exact appointed time.

We were told that we couldn’t go in before the first song started with a riff intro, and a curtain would fall over the ditch where the photographers would stand. Strangely though, the curtain fell before the band entered the stage and the organizers showed us to our spot with a confused look on their faces.

As Mustasch entered the stage, the people at the bar came closer, making it easier to tell that the place was half filled. The start of the show was good. The band knew their fans were waiting for rock, so they gave it to them without babbling and introduction.

During the very fast three songs we were there to photograph, the band succeeded in capturing the audience with their hard riffs and energetic show. Mustasch is known to be better live than on albums. I hope, for the audience’s sake, that this was the case even this night.