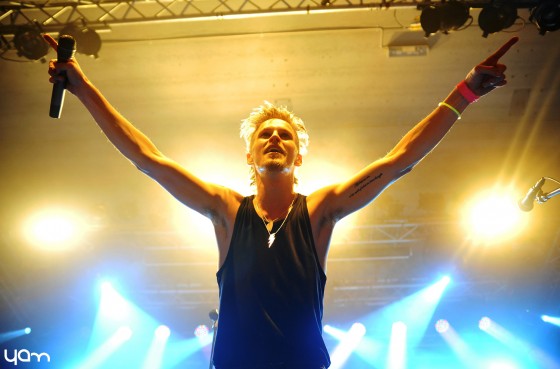 I was almost nostalgic as I walked into the doors of the small Klubben-arena in Stockholm. I have seen so many bands at this place, some of those bands were friends of mine and other times it was bands like Muse or Travis before they became larger and played bigger arenas. Since I have been following the progress of H.E.A.T for some time, it almost felt like a mix of both experiences. I managed to get myself a short talk with the guys before the show and they seemed really excited to play tonight.

Last time I met them was a couple of months ago when they just have released their new album Address the Nation, an album liked by many rock critics. Now they have been touring for quite a while, promoting their new album.

Before H.E.A.T entered the stage, two other bands warmed up the audience: The Gloria Story and Crazy Lixx. Unfortunately I didn’t get a good chance to see these bands, but the atmosphere was great when I arrived, so I guess they did a good job. Amongst the audience was a mixture of young adults and middle-aged men, but also teenage girls, which I found was an exciting cocktail of people; however, I felt that the chance of seeing a mosh pit was slim to nil.

Before the band entered the stage, they blasted the sound of The Heat Is On by Glenn Frey, a cocky maneuver that I enjoyed. As H.E.A.T entered the stage, the cocktail started screaming. The band started off with the first song on their new album, Breaking the Silence. I like this song. It’s heavy, it’s fast and it gets to your head, a perfect song to start with.

For you who missed it, Erik Grönwall, wasn’t H.E.A.T’s original singer, but he has learned the old songs very well and given them his own touch on them, which I, for one, like a lot. He shows tremendous energy on stage and changes his appearance four times during the whole show. However, one thing that kept bugging me was his recurring jazz dance moves with his feet which didn’t really belong there.

The show had high tempo and a nice feeling in the audience the whole time. H.E.A.Tcontinued playing a mix of both old and new songs and the setlist, even though it was basically the same as the last gig in Gothenburg, was well planned and kept the crowd in a nice state of mind as they heard songs like 1000 miles, Downtown, Beg Beg Beg and so on. As the band played the song In And Out Of Trouble, a new band member is introduced: Jonas Davidsson, or Jazzy Joe as they call him, entered the stage and accompanied the band with his saxophone. Unfortunately, the sound of his instrument was not properly tested and it was almost impossible to hear him play.

The night ends with an impressive acoustic performance and some acrobatics by Erik.

To sum up the night: pretty good, it rocked. The band told me that they are looking forward to the gigs in England next year but also hope to go to Asia again. I wish them all the luck and will follow the progress with interest.