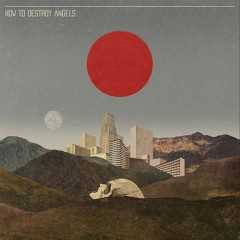 Industrial rock veterans Nine Inch Nails aren’t the pop culture force they used to be. Actually, the more experimental side of rock music is waning, with a clear absence of industrial and alternative rock in the North American mainstream.

On the flip side, NIN frontman Trent Reznor is still putting out music. Reznor and longtime collaborator Atticus Ross won an Academy Award in February 2011 for their work on The Social Network soundtrack.

And it seems these guys are two peas in a pond. Joining Reznor’s crazy hot Filipina wife Mariqueen Maandig, post-industrial rock band How To Destroy Angels is born. A lot of people (specifically, NIN fans) have a lot to say about the Reznor-Mariqueen union, but these two have some thrilling musical chemistry.

The band’s EP is a six track demonstration of a short but sweet record. Maandig’s silky vocals brim with sexuality, bringing some much-needed femininity to Reznor’s aggressive musical experiments. There’s a lot of whispering and quiet singing, but she’s a vocal fit – an ice queen.

The dark BBB is a stomping anthem to big, black boots: bass-heavy with an excellent use of the Swarmatron, a very complicated electronic instrument. The three-note electro-riff is terrifying and empowering. Fur Lined channels the NIN at their prime, a rocky flare made for live audiences, but tailor-made for Maandig’s sex appeal. And lead single The Space In Between brings an almost tribal percussion feel to a moody, synth-violin atmosphere (check out the music video).

So are they different from NIN? A little, but not by much.

How To Destroy Angels is experiential – they’re all about textures. Dark, brooding textures. And the Reznor-Maandig union really knows how to exploit that darkness. Much of the dark sound comes from the deep, electronic production. But Maandig’s icy vocals writhing around in it bring it to another, breathy level.