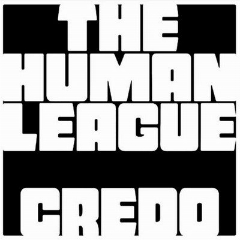 Pioneer new wavers The Human League are back after a ten-year hiatus with Credo, their ninth studio album.

While three decades have passed since their iconic Dare came out (1981), and their biggest-selling hit to date hit the charts (Don’t You Want Me), it feels as if time had never passed for the British trio. Credo sounds very much like The Human League, very much like the 80s, and very much like Dare. Interesting choice – repeating a money-making formula to potentially revive a style, an era and perhaps even a state of mind.  However, Credo fails to deliver the spirit, the musical zeitgeist that Dare represents, and the result is a vintage, stark-sounding record with very little heart.

Despite its refinement and high quality, Credo is inconsistent. It is intensely epochal but it is lost in time. It has some of the elements that made The Human League so brilliant and influential: pulsing synths, lead singer Philip Oakley’s robotic baritone and no real guitar or drum work. Indeed, this was inspirational and interesting back when they were breaking new grounds in the field of electronic pop. This sounded like seminal avant-garde industrial band Throbbing Gristle with a happy edge, and that was definitely a good thing. Now that we’ve seen artists emerge from this brilliance, take the best and make it better, artists such as La Roux and KMFDM, we expect more, and we are not easily impressed.

Credo is a little retro finding in a world of futurism and innovation. It can have its moments, especially if you were not there to see The Human League in all its synth-poppy glory back in the day, and it is interesting if you weren’t there to see the new wave madness as it unfolded. It is, however, aged, wrinkly and washed out if you know the basic cornerstones of electronica, and if you know the extent of The Human League’s influence in this genre.