Majority of One, A 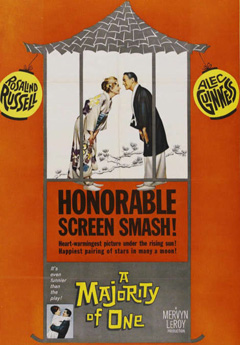 I’m stepping on Marya’s territory here, but I got the chance to catch A Majority of One on one of those rare TCM occasions in LA, and who in their right minds doesn’t LOVE Rosalind Russell?

The elephant in the room here is that A Majority of One is an adapted screenplay from the play of the same name. The play addresses racial prejudice in a story about a Jewish widow who overcomes her dislike for the Japanese after the war when she meets a Japanese businessman. In the play and film, however, the Japanese businessman is played by actors Cedric Hardwicke (Broadway) and Alec Guinness (in this film) — so much for racial acceptance, huh? [1]

But if I can take a lifetime of El Chino Yufra, I certainly can overlook the yellowface in a movie at a time when it was still common. At least Mr. Asano wasn’t an insufferable character like Mr. Yunioshi in Breakfast at Tiffany’s.

A Majority of One begins when widow Bertha Jacoby (Russell) is having her daughter, Alice (Rhue), and son-in-law, Jerome (Danton), over. Bertha’s best pal Essie (Mae Questel) is there to dampen the mood when she mentions that she’s looking for a “better” place to live because the neighborhood is being swamped with not-so-desirable foreigners. This, of course, doesn’t please forward-thinking Jerome or Alice who begin telling Essie off for not being open-minded like them.

We then discover that Jerome works for the government and has been promoted to a position at the American embassy located in Yokohama, while Alice refuses to move all across the Atlantic if Bertha doesn’t come with them. In the end, Bertha accepts and begins her journey to the other side of the world, where she is introduced to Mr. Koichi Asano (Guinness), who at first is received with a hint of courteous disdain.

The Japanese businessman is puzzled by such a cold introduction, but is quickly to gain Mrs. Jacoby’s favor with his charm and wit. However, all isn’t great when Alice and Jerome see the duo getting closer.

Though the message of racial prejudice is undermined by the yellowface, A Majority of One is a pleasure to watch, especially during the sequences in Japan, where the culture clash makes Rosalind Russell shine the most. I mean, the sight of Russell in a kimono sitting on amped cushions for her comfort while sipping on sake is just too much in one scene alone.

Though it takes a while to get over the slanted eyes on Alec Guinness, you eventually start seeing him as the respectful and honorable Mr. Asano, and we’re fully into it once we reach his home — which, by the way, features George Takei as his son~

One has to wonder what this film might turn out like with different casting… or, gasp, a remake? Who would you cast in each role? Would you change the historical setting?

Like they would say: “Don’t touch my mustache~” or Douitashimashite (どういたしまして).