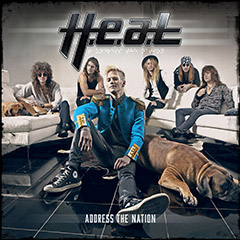 It has been a while since we heard something from the rockers in H.E.A.T. The fans have eagerly been waiting the new album with new singer Erik Grönwall replacing Kenny Leckermo. But the waiting has not been in vain because this time they have really released an album with high quality and a lot of power. You can tell that they have put a lot of effort into making the songs just perfect and the way they like it. The help from genius producer Tobias Lindell gave them the sound they were looking for.

One of the most positive feelings I get when I listen to the album is that you can hear how they have evolved as individual musicians and as a band. The timing is better, the solos are more advanced and the lyrics really get to you.

The task to replace Kenny’s voice in a band like H.E.A.T is not an easy one, but Erik’s routine and charisma really fits in and will be perfect in the future. Fast songs like Living on the Run, or ballads like The One and Only, he nails them all.

Address The Nation gives you a little bit of all the legends from the late 80s and 90s like Europe, Whitesnake and some Mötley Crew, but with H.E.A.T’s own sound of course. The album is packed with songs made to make an impact on today’s rock charts.