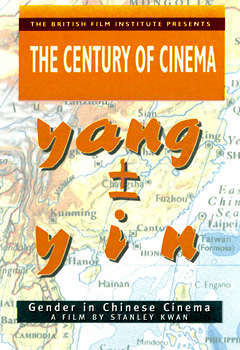 Commissioned by the British Film Institute as part of the 100 Years of Cinema celebrations, Stanley Kwan takes a look back into the history of Chinese films with a broad array of filmmakers such as Chang Cheh (The One-Armed Swordsman), Chen Kaige (Farewell my Concubine), Hou Hsiao-hsien (A City of Sadness), John Woo (A Better Tomorrow), Tsui Hark (The Lovers), and even Ang Lee (The Wedding Banquet), whom we all know ended up directing the acclaimed Brokeback Mountain.

While the beginning of the film is sketchy, Kwan revealing that his interest in martial arts film had little to do with the martial arts part of it and all to do with the half-naked torsos of dashing men, Yang ± Yin explores the history of the genre, which rules itself with the code of chivalry and roots its success in male bonding — now termed “bromance“, which we use colloquially.

Kwan has a lengthy conversation with film director Chang Cheh, who pretty much established the Kung Fu film genre and discovered the stars of his films by seeing their qualities — one of them being Wang Yu, who was Kwan’s favorite. Though this whole section of labeling bromantic relationships as homoerotic seems to be grasping at straws, its treatment does remind me of The Celluloid Closet, even if Yang ± Yin doesn’t have writers and directors bluntly telling us they intended the homoerotic scenes — everyone dodges a real answer, but agree that these things can be taken as such.

The documentary takes a different route once we leave Chang Cheh and John Woo behind and we get to talk to Chen Kaige. He discusses the changes he made to his award-winning Farewell my Concubine, in which Dieyi (Leslie Cheung), ends up meeting Xiaolou at a bathhouse in their old age instead of the film’s ending. Kwan also talks to Leslie Cheung, who was openly bisexual, regarding the roles he was given. They also discuss society’s view of women that take on masculine roles — like Brigitte Lin in Wong Kar-Wai’s Ashes of Time — and their take on men taking on feminine roles. Watching this segment nowadays paints a bittersweet picture as Cheung committed suicide in 2003 because he was suffering from depression.

Yang ± Yin also addresses the fact that Chinese films were different because they were so used to giving top billing to their female stars — sadly, something that is no longer a practice. Despite the film’s focus on gay men, they mention Sang Hu’s Liang Shanbo and Zhu Yingtai, a 1953 version of the famous Butterfly Lovers [1] story — the one with a girl who dressed up as a boy and enters a school where she meets a boy who begins having feelings for her without knowing she’s not a he. While Tsui Hark’s 1995 version of it in The Lovers does an early revealing of the secret, Sang Hu’s version extends the secret for as long as possible while also developing their commitment for each other.

They also talk about Cantonese opera singers Yam Kin-Fai and Bak Sheut-Sin, who reprised many of their opera roles for the silver screen and often played against each other, Yam Kin-Fai always taking the male lead. This story and how it connects to Stanley Kwan and his relationship to his mother is kind of like the cherry on top of a wonderful exploration of gender in Chinese cinema that has left me wanting to explore more.