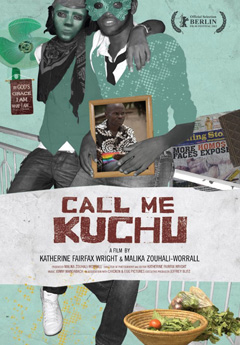 In 2009, Ugandan politician David Bahati introduced a draconian bill that would make homosexuality in the country punishable by death. Moreover, anyone who knowingly harbored a lesbian, gay, bisexual or transgender person — or “kuchu” — would also be held criminally accountable.

The Anti-Homosexuality Bill, dubbed by the media as the “Kill the Gays Bill,” threw Uganda into the international spotlight and serves as the backdrop for Katherine Fairfax Wright and Malika Zouhali-Worrall’s powerful new documentary Call Me Kuchu.

As the government, media and evangelical religious leaders seek to eradicate homosexuality from Uganda’s history, a small but courageous group of kuchus in the capital city of Kampala determinedly fight to maintain visibility. Rampant fear mongering has caused many closet doors to stay closed, yet what they lacked in numbers they more than made up for in personality and compassion. Leading the good fight is Uganda’s first openly gay man, David Kato, who dreams of transforming his farm into a safe haven where all kuchus can come together and live without fear of discrimination. Kato’s life mission is to ensure that he and his fellow kuchus have a voice because, as he says, “If we keep hiding, they will say we’re not here.”

As the documentary unfolds, we see how long and difficult the road to equality really is. Over the course of a year, Fairfax Wright and Zouhali-Worrall followed Kato as he met with UN ambassadors to expose the kuchus‘ oppression to the world. In one of the film’s most poignant moments, Kato stands before a city court and successfully seeks an injunction against Rolling Stone newspaper — infamous for publishing the photographs of one hundred homosexuals and their personal information with the caption of “hang them” — for carrying out a horrific smear campaign calling for the murder of Kampala’s kuchus.

As a family, Kato and the other kuchus display their pride and are able to maintain a sense of normalcy: a party to celebrate a couple’s anniversary; a drag show to crown the new Queen of the Kuchus. Yet these celebrations take place behind high walls and locked gates and Kato, who lives alone, admits his fear of being attacked — a fear that became a heartbreaking reality in January 2011 when he was bludgeoned to death in his home.

Kato’s death caused public outcry on an international level and shifted the focus of this film from his living story to his lasting legacy. At home in Uganda, his friends and family struggle to cope with the loss of a dear friend and leader. Would they be able to continue his fight for human rights in the face of such violent intolerance? Is the struggle even worth it? For those who had the courage to be open and advocate alongside Kato, the answer is undoubtedly yes.

Call Me Kuchu ought to go a long way in allowing their voices to be heard.

Call Me Kuchu opens in the UK on November 2nd 2012 thanks to Dogwoof. Check their website for screenings of the movies.