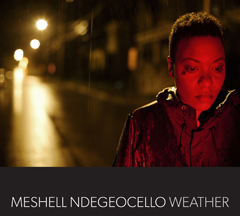 It’s been two years since Meshell Ndegeocello’s last release – the blood and guts Devil’s Halo. Weather finds Meshell in a state of immense introspection and radiant calm, something that was sorely missing in her music since Bitter.

What strikes me about this album is its serenity. I think the most heartbreaking thing about Meshell is that her voice always seems filled with an air of pain, a nagging poignancy that just, for a time, didn’t seem like it could be erased. Weather finds the goddess in a state of serenity that verges on wistful. Her voice, ever blue and full of low lights, is now filled with the air of a thousand stars — sighing instead of growling, soothing instead of chastising or combative.

A couple of the tracks, namely Chance, do seem to be a bit more pop than sizzle; however, what seems to be a lack of tenderness can be brushed aside as simply the means to find inner peace – experimentation with production in order to find the right combination of honesty, prudence, and peace in herself.

The album itself is a tender mood, something that allows for lovers to finally love and stop quarrelling. Tracks like Objects in Mirror are Closer than They Appear, Feeling for the Wall, and Chelsea Hotel have the muster and spice we’ve come to love in her music. While tracks like Crazy and Wild and Dead End show her expansion into fare that’s lighter and full of happiness than we’ve heard from her since her Comfort Woman days.

Weather is the perfect return for Meshell in a musical environment whose atmosphere has become as turbulent as the jungle due to the Greenhouse Effect. This is a release worthy of recognition as one of the most clear and precise of 2011.

Standout tracks: Objects in Mirror are Closer than They Appear, Feeling for the Wall, Oysters, Chelsea Hotel, Don’t Take My Kindness for Weakness

Listen to the album on Xiami and buy the album from Amazon.