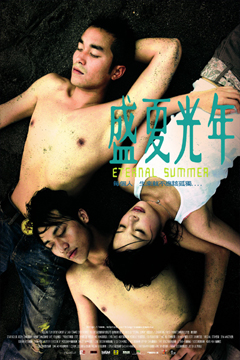 Joseph Chang, please, stop making me cry with your monologues! For those of you who had enjoyed Eternal Summer, I also recommend Gf*Bf — and vice-versa.

Eternal Summer tells the story of two boys, the proper Jonathan (later played by B.Chang) and the rowdy Shane (later played by J. Chang), who befriend each other. Their teacher asks Jonathan to befriend Shane, who has a lot of trouble making friends due to his unruly character, in the hopes to calm Shane down. However, that strategy has never really worked, has it? Instead, studious Jonathan drops in grades, and their journey together begins when scoring a 67 on his last test, compared to Shane’s lowly 33. To cheer him up, Shane tells Jonathan that his 33 complements Jonathan’s 67 to make a perfect 100.

Now about to finish high school, the two are still the best of friends. Though Shane has adapted himself fairly well, Jonathan’s grades aren’t all that great. One day, the teasing Carrie (Yeung) arrives and sets her eyes on the boyish Jonathan. On a whim, they’re about to sleep together, but Jonathan is unable, which sets a chain of events that will entangle everything.

The look of Eternal Summer has this green tinge, which I think took over for a few years back in the mid 2000s [1], which does tend to date the feel of the film. However,what elevates it is the material — as unnecessarily melodramatic as it is — as well as the performances. Though Eternal Summer is… sort of… a coming out story in essence, it becomes deeply moving due to the friendship displayed, as well as the exploration of the fear of loneliness. Bryant Chang plays a deeply tormented young man who loses himself due to the fear of losing his best friend, and when it becomes unbearable and it begins eating him up inside, he pushes Joseph Chang’s character over the edge.

The most surprising is Kate Yeung’s characterization, which seemed to be pointing towards scarlet woman tearing two friends apart but turned out to be the one trying to keep this friendship together. Though her actions are sometimes questionable, she later comes off as very sensible and sensitive to Jonathan’s issues, which is unique in genre films that tend to be labelled as “opposite gender hating” films. Though Carrie never truly feels like she belongs into this niche group, she becomes the worn-out glue that’s trying to keep it together.

More than a deeply affecting LGBT, it is a story about loneliness and the roots of an accepting friendship that might outlast anything in their lives, even if its surrounded by unrequited love anywhere you’re looking from.