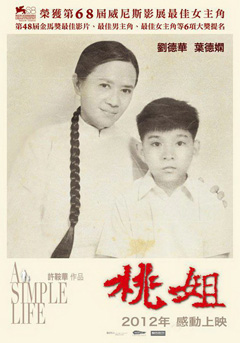 Let me start off this review with a comment on this poster. It’s perfect. I seem to notice some oddness about Tao Jie’s face, but Roger’s face is perfect. These are Andy Lau and Deannie Yip. xD

A Simple Life is a simple story about a man named Roger (Lau) and the anything-but-simple relationship with the woman who has worked for his family for 60 years of her life, Tao Jie (Yip) — Ms. Tao, and the original title of the movie.

For someone like me, it was easy to connect with Roger as a character who has grown up being raised not only by his family, but also by his “extended” family. His relationship with Tao Jie, the woman who works not only as a maid, cleaning up after the family, but also as a form of nanny — to me, that’s a very familiar scene.

Throughout the film, director Ann Hui takes her sweet time to establish what sort of relationship Roger and Tao Jie have — she pampers him a lot. As a boy, Roger was probably Tao Jie’s favorite kid, and he got the best of her. We see that, and as an audience, we probably think about the people that have been with us as long as these two have been together, as the reality of the situation hits us.

Tao Jie is an older woman now. After a stroke, she wants to be at an old people’s home — that situation alone makes for a weepy story, but Hui’s decision to step away from some of the melodrama, focusing a bit on some of the terrible state of housing for old people and how the system works and even adding some humor, does wonders for those who don’t like melodrama.

A Simple Life balances its depressing moments alongside the light comedy to weave an emotional tale that won’t turn off Western audiences — there’s really no crying from any of the major characters, so it won’t make people uncomfortable, and will let you cry for yourself.

Andy Lau and Deannie Yip play great opposite each other, especially in the scene when we see her prepping for a movie premiere, filled with illusion and anticipation. It’s probably one of the most exciting and saddest things in the film. It goes as a great compliment to the scenes during the credits — so don’t you dare walk out from the cinema or turn off your player!

The only thing that prevents me from giving it a higher rating (I was about to give this 1/4 of a star more) is that the ending felt rushed for me. I felt Tao Jie’s deteriorating state went from seemingly not-so-okay to completely worse in the blink of an eye. I wouldn’t have minded and added 15 or 20 minutes, since the movie barely clocks in at two hours. Of course, that may have been too masochistic and melodramatic for some.

Overall, I think it was a crime that A Simple Life didn’t get the Best Foreign nods at the Academy Awards last year, but then again… so many other great films last year didn’t make it to that ceremony.