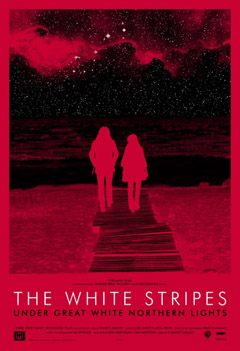 There is something iconic about The White Stripes. Perhaps it’s their hippie, yet sophisticated air. They make Bluegrass, Folk, Blues, Rock & Roll, Rock and they can even make pure noise if they feel like it. They are completely committed to their aesthetic image of white, red and black… and even though they’re just a guy and a gal, they can act like total rock stars, which they are.

In White Northern Lights, Emmett Malloy documents the band’s first time doing a nationwide tour in Canada, not only visiting the biggest cities in the country, but also stopping by unusual venues in not-so-known Canadian cities like Whitehorse in Yukon, Yellowknife, a public bus in Winnipeg in Manitoba, a day camp in some city in Ontario and even a bowling alley in Saskatoon, Saskatchewan.

It wasn’t about big shows in big stadiums and big crowds, but about raw sounds, energy and emotions. The people found out about impromptu shows one hour ahead of them, and showed up in hopes that their anonymous tips were any good. Jack and Meg even have a music-off with a group of Inuit elders!

It’s amazing the variety of genres The White Stripes can cover, which would make them a band worth checking out live in any place… big or small. After all, it’s all about the music and their energy display.

The documentary is truly a gem for painting a contemporary band as such an iconic and timeless band for the future. This will truly be a musical and visual classic.