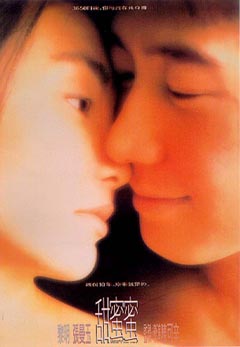 Ever since I saw this film a week ago, I have been believing in love like I haven’t before — the complete experience, singing love songs at the top of my lungs and all.

What have you done to me, Teresa Teng?

Comrades: Almost a Love Story is a simple, realistic, long-winded love story set in the mid-80s and 90s, when Mainlander XiaoJun (Lai) arrives to Hong Kong for a better life without knowing a lick of Cantonese. He lives in the tiniest of rooms at his Auntie Rosie’s (Tsu) minuscule apartment, and works at whatever he’s able to without having to communicate much.

Diligently, XiaoJun spends his weeks writing back home to his girlfriend XiaoTing (Yang), telling her about the amazingness of Hong Kong life — and McDonald’s. When XiaoJun finally saves enough spare change to visit McDonald’s, having learned the Cantonese words for “hamburger” and “Coca Cola,” he meets QiaoLi (Cheung), who notices his language impediment and helps him in Mandarin.

QiaoLi is a girl that, in regards to working and making money, she goes at it at full speed. She has no time for sidetracking on silly things like feelings and relationships because she needs to make money… and if she had more time in her day, she’d spend it making more money. Working jobs like it’s nobody’s business, QiaoLi takes XiaoJun up and down to work him to make money.

Eventually, one thing leads to another, and things get complicated.

Of course, Comrades: Almost a Love Story is a love story (it really is, it’s not an almost). However, the story almost adds elements that take you to the precise time and place alongside these people, who stop being characters from a movie and become real people. The truthfulness and the complexities of XiaoJun and QiaoLi’s interactions ring so close to real life that is almost impossible to look away once you begin watching.

Director Peter Chan Ho-sun and scriptwriter Ivy Ho manage to develop a romantic story that avoids going over the line of dreamy Hollywood cliches… or maybe it does, but Leon Lai and Maggie Cheung’s performances are so natural that it’s easy to forget you’re watching a film. I also loved how it took turns and was able to include the 90s market crash, and of course, the inclusion of Teresa Teng was a huge plus [1], in between migration, the crashing of dreams, and all the harsh reality thrown at you.

I could have easily given this a near-perfect score if I hadn’t had issues with how many times I thought the movie was going to be over, but wasn’t. Not that I minded it much, because I wasn’t satisfied with what could have possibly been bitter endings.