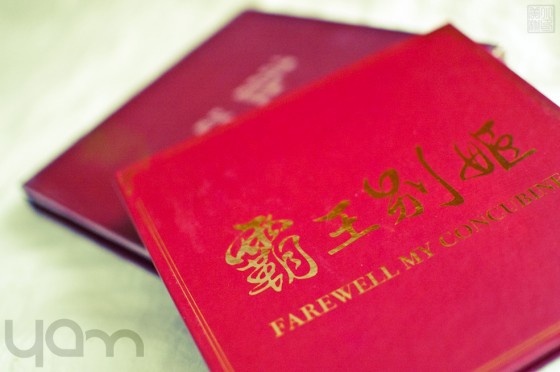 Home releases for Chen Kaige’s contemporary classic, the tragic Chinese opera tale of Farewell my Concubine (霸王别姬), is a tricky buy for most people. We just… haven’t gotten a proper release for it.

At first look, we’re presented with lush packaging. It’s more than you would expect for a regular non-special edition release, in any case. With a hardcover square case that’s 16.5cm, in a deep muted red matte paper and light golden letterpress of the title of the film in Chinese. The disc information is all in printed white and does cheapen the release, I think.

I would’ve preferred the simple golden letterpress of the English and Chinese titles that’s used in the second case and kept all the extra information inside. But as a whole, this does look pretty nifty.

My only other pet-peeve in packaging is that there’s no proper disc holder, so in order to avoid the disc getting scratches, they’ve added a plastic bag… which, you know. It’s a plastic bag.

So does this China Bluray release do the movie justice?

At the moment, it’s probably the best release of the film, quality-wise. I don’t think I’ve ever seen it as detailed as I just did, despite some of the graininess and blur of the transfer. The audio is also vastly improved, though I’m still not sure what’s the difference between a two-channel Dolby HD or a regular Dolby.

You can get this release over at YesAsia.