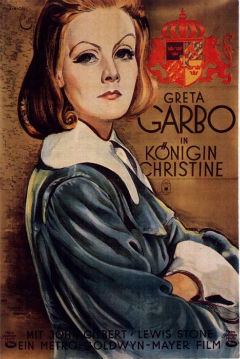 While this film is more historical fiction than a historically accurate portrait of Sweden’s 17th century Queen, it is an engaging film anchored by what is quite possibly Greta Garbo’s greatest screen performance.

In real life Sweden’s Queen Christina was rumored to be bisexual, but in the film her bisexuality is only slightly alluded to — a kiss on the lips of her lady-in-waiting, among other little things. What is prominent in the film is the Queen’s desire to dress and act as a man.

When we first see her after the death of her father, King Gustav, she is a little girl who is described as being raised as a boy. Indeed, she is dressed like a boy, pants and all. Throughout most of the film the Queen is dressed in men’s garb. When told by an advisor that she should marry and “not die an old maid,” she replies, “I have no intention to Chancellor. I shall die a bachelor!” At one point she even sneaks into the nearby town, dressed in drag, and successfully passes herself off as a man.

It’s during this trip that the Queen meets stranded Spanish envoy Antonio (Gilbert), falls in love and spends the night with him. There’s a great little scene with Antonio’s servant the next morning wherein he assumes Antonio has spent the night with another man and the two discuss it very nonchalantly.

This is the kind of thing that Old Hollywood could only do in the Pre-Code [1] days and it’s kind of refreshing to see any kind of sexuality treated as something natural in an older film, and not danced around with double entendres or treated as a shameful event.

While Garbo and Gilbert do have sizzling chemistry (on and off-screen), the love story is probably the weakest part of the film. It is when Queen Christina is defiantly exerting her own agency over the way she wants to lead her life, and the way in which she intends to lead her country that the film really excels. Garbo is clearly comfortable in this kind of a role and it’s a shame there weren’t more films like this for her to make.

The film ends on a terribly romantic note, albeit a not very historically accurate one; the final shot of the film, a glorious close-up of Garbo’s face, would go on to become one of the most iconic images from the Golden Era of Old Hollywood.

Don’t forget to check the rest of the posts for our 2011 LGBT Blogathon!