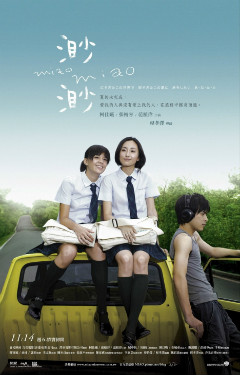 Miao Miao is an interesting film, in that it’s completely fluffy all throughout the beginning of the film, as fluffy as one of those cakes so popular in Taiwanese coffee shops, but just like ending your sweet dessert with a cup of good coffee, Miao Miao has that tinge of bitterness of a love never realized.

In it, we follow a Japanese exchange student in Taiwan nicknamed Miao Miao (Ke) by Xiao Ai (Pinna), who immediately takes an interest in the new girl. Xiao Ai is like a ball of energy who drags Miao Miao around the city, and helps Miao Miao find the cake shop her grandmother fell in love for the first time, only to find it’s become a second-hand music shop, where the moody Chen Fei (Wing Fan) works with his headphones on.

Miao Miao finds Chen Fei interesting, and tries establishing common conversation with him, but he lives closed in his world protected through his headphones. Xiao Ai’s developing relationship with Miao Miao gets more and more complicated as the film goes by, and we see that Xiao Ai’s feelings towards her friend are more than just playful friendliness. This goes on par with Chen Fei’s own story told through flashbacks, which is a bit confusing, but works in the context of the film — which, by the way, also has to do with LGBT issues.

Miao Miao is produced by renown director Wong Kar-Wai (if you prefer: Kar-Wai Wong), and the film has that certain quality. We can probably compare Xiao Ai’s character to Faye in Wong Kar-Wai’s Chungking Express, she’s the life of the party but her story has a gloomy side. Though Jia-yan Ke is at the center of the story, it is both Chen Fei’s background story and Xiao Ai’s relation to Miao Miao what make the film.

Sandrine Pinna is completely different to her character in Candy Rain, where she also played opposite a female love interest. In here, her interest towards Miao Miao is, at first subtle — you could probably think it’s a friendship, up until when Miao Miao’s interest in Chen Fei begins getting to her.