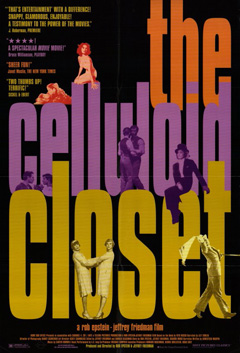 This is one of the absolute best documentaries about any aspect of Hollywood history to date. Narrated by actress Lily Tomlin and based on the 1981, and later revised in 1987, book of the same name by Vito Russo, The Celluloid Closet takes a look at the how the LGBT community has been depicted in Hollywood from the silent era all the way through the early 1990s.

The documentary starts with a look at several silent films, including Charlie Chaplin’s 1916 film Behind The Screen, where the documentary points out several stereotypes about gay men – effeminate behavior for one – that were already clearly well established in American society.

It continues with a look at the stock character known as “The Sissy” in the early pre-code films. Throughout the documentary there are interviews with various people, some Hollywood insiders, some not, some from the LGBT community and some not. Screenwriter Arthur Laurents finds the character of The Sissy very offensive. In contrast, actor/screenwriter Harvey Fierstein said he always liked them and for him, “it has always been visibility at any cost” and he’d rather have, “negative than nothing.”

The documentary then looks at the more subtle LGTB subtext and derogatory characters created during the Hays Code era of Hollywood (roughly 1934 to 1967). Due to this production code, which had strict guidelines when it came to various vices, including “sexual perversion,” filmmakers had to be very subtle with their use of gay subtext. Although, admittedly, sometimes it wasn’t very subtle and the censors still had no clue.  By the 1960s the code began to break down and there was open discussion of homosexuality, though still mostly in a negative light. With the complete abandonment of the code by the 1970s and the American New Wave into the 1980s and 1990s, the LGBT community was finally being seen in a natural light, at least some of the time.

Included in the documentary are interviews with several film historians, LGBT scholars, LGBT Hollywood insiders and stars who have merely portrayed a member of the LGBT community on screen. Some of the best insights come from Tony Curtis, who talks about Some Like It Hot and Spartacus, Harvey Fierstein and Tom Hanks. Hanks won his first Best Actor Academy Award for his portrayal of a gay lawyer who died of AIDS in 1993’s Philadelphia.

This documentary is packed with information, though because the original book written and revised in the 1980s, tends to skew towards older films. It’s a shame the author, LGBT activist and film historian Vito Russo died in 1990 of AIDS. If he’d lived, it would certainly be interesting to see his work on the upsurge of LGBT film, both as a genre and in mainstream films, in the last twenty years.

Along with the various interviews, The Celluloid Closet also features countless film clips from the films discussed. After you’re through watching the documentary, you may well have a giant list of films you feel compelled to watch.

Anyone interested in film history or LGBT history will love this documentary. Really, just about everyone who loves films in general will probably enjoy this informative, insightful and fun examination of an often overlooked element of Hollywood.