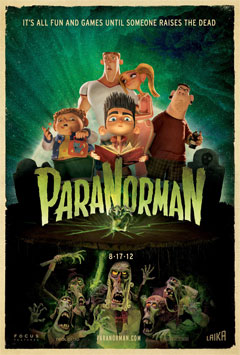 Norman Babcock (Smit-McPhee) can see and speak with ghosts, and his social life suffers for that reason. His family doesn’t understand him and the kids at school think of him as a weirdo. But his problems are about to get worse: there’s a 300-year-old curse on his town of Blithe Hollow, and his “sixth sense” means he’s the only one who can stop it.

ParaNorman is an excellent 3D stop-motion film from Laika, the same creators of the also awesome Coraline. And like Coraline, it’s a scary tale for kids that also dishes some good messages for the little ones. This time is about tolerance, respect, individuality and being true to oneself. ParaNorman is also funnier, ironic and has many references to “B” horror movies.

The animation itself is a huge part of what makes you appreciate this movie. The stop-motion is done in a superb manner and it works seamlessly with the computer animated parts. And while the 3D was not as good as in Coraline, it served its purpose. In fact, the animation of the whole last act of the movie was so well done it was worth a whole star alone; it was surreal and beautiful in a slightly creepy way. Also, I found the character designs to be quite interesting, especially with the never-behaving hair of the protagonist, the Hart Man Hips of Courtney Babcock (Kendrick), the asymmetrical face of Norman’s mum (Mann), and the general look of Judge Zombie (Hill), which reminded me of Bill Nighy somehow.

But the animation was not the only thing deserving of kudos. The soundtrack also played an important part, and Jon Brion (Magnolia, Eternal Sunshine of the Spotless Mind) composed music as the mood of the movie needed it, fluctuating between music inspired from 80s horror films and more epic orchestral compositions, with some pop and ballads in between.

The story itself was simple but effective, and had enough twists that made it enjoyable. Also the characters were likeable, or would be by the end of the movie, as most of them got character growth, even if it was rushed in some ways.

All in all, it was a good movie that could be enjoyed by everyone; and while it has ghosts, zombies and witches, as long as your kids aren’t toddlers it won’t give them nightmares.