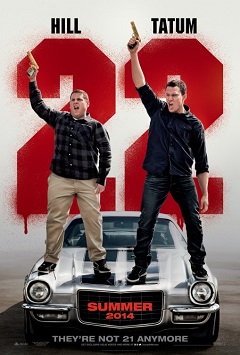 I’ll go ahead and say that you should watch the surprisingly great 21 Jump Street film before heading into the sequel because a lot of stuff present in this film happens to play off from the events seen in the first film. But you can also watch this, which includes a recap of the previous events, and still be pretty entertained by it. Yet, watching the previous film makes this one resonate stronger for the viewer.

22 Jump Street follows Schmidt (Hill) and Jenko (Tatum) working on the streets after their success . However, they manage to screw up a mission involving the capture of drug-dealer Ghost (Stormare), leading Deputy Chief Hardy (Offerman) to put them back in the Jump Street program, now located in a Vietnamese church and with a bigger budget, and serving Captain Dickson (Cube) once again.

Their assignment is to go undercover as college students and locate the supplier of a drug known as “WHYPHY” (Work Hard Yes Play Hard Yes) that killed a student photographed buying it on campus.

Does the plot ring a bell? Yep, it sounds like we’re getting another unoriginal sequel. However, 22 Jump Street is very aware of its similar plot and it actually makes fun of sequels and film production throughout its storytelling, which is highly enjoyable to watch and includes several references towards the first film, as well as developving Schmidt and Jenko, whose friendship is put to test when the script reverses the dynamic from 21 Jump Street and ends with Jenko befriending football jock Zook (Russell, son of Kurt) while Schmidt goes back to nerdy territory and falls for art student Maya (Stevens).

Acting-wise, the chemistry between Hill and Tatum remains intact and both are compelling and hilarious to watch when they’re together. Individually, Tatum slightly edges out Hill this time because he seems more confident on screen with his buffonish character and he also has very strong chemistry with Wyatt Russell through Zook and Jenko’s bromance. His work as Jenko is easily the best he’s done in his career so far and I’m looking forward to see what he can do in Foxcatcher. The rest of the supporting cast is pretty good to watch. There’s Wyatt Russell as your typical jock, who happens to be treated quite well for a BMOC. Meanwhile, Jillian Bell as Maya’s snarky roommate clashes often against Schmidt in hilarious fashion while Amber Stevens works the romantic scenes nicely, which leads to a hilarious payoff. On the other hand, Ice Cube as the Captain gets more screentime and becomes more central to the story. His reactions towards everything Jenko and Schmidt do is very funny, especially with Schmidt in an incident that ended up being way too personal for the Captain.

While 22 Jump Street builds up its resolution and still remains hellbent on its sequel parodying from start to finish, along with providing big laughs, the best parody elements are shown in the post-credits. It was a treat to watch a sequel that can actually improve upon the first film, and it’s even more remarkable in the way 22 Jump Street pulled it off.

P.S.: There are post-credits scenes which offers in joking fashion a endless future for the series. You have to see it for yourself.