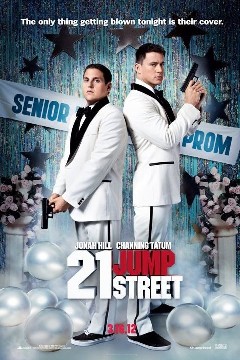 Based on the 1987 TV series of the same name, 21 Jump Street follows  police officers Morton Schmidt (Hill) and Greg Jenko (Tatum), who hated each other back in their high school days. A few years later, they meet again at a police academy and became friends. They graduated by using their strenghts to work against their respective weaknesses. While Jenko is the muscle, Schmidt is the brain behind the duo.

After screwing up a drug bust, the film’s title comes into play as both guys are reassigned to a revived division speciality in order to stop a new drug spreading from high schools to other places.

I headed into 21 Jump Street with low expectations despite the good reviews the film had. Not all films that center around high school scenarios turn out to be great, given their ways of employing humor and raunchiness as well as the high school theme being done to death. However, not only did the film turn out to be actually enjoyable thanks to the humor, screenwriting, good performances, but most importantly, the role reversals that Jenko and Schmidt go through make 21 Jump Street worth the watch.

This might be shocking to read and I never thought I would say this, but 21 Jump Street made Channing Tatum look great and it’s a career highlight for him. Who knew that he could actually be funny? Tatum not only held his own against Jonah Hill, but he handled Jenko’s accidental role reversal suprisingly well — going from stupid jock to hanging out with the nerds and learning chemistry — and even steals the show in a scene when Jenko senses loneliness and insecurity in contrast to Schmidt’s new lifestyle.

Jonah Hill’s performance as Schmidt is the best among the cast. He plays Schmidt to a tee, as the brainy yet shy cop launches himself into a world that is foreign to him  — a different society that leads him to hang out with the cool kids, starring in a theatrical production of Peter Pan and getting a love interest in Molly (Larson). Later it spirals out of his control when he tries to maintain his new reputation. Hill gels well with Tatum, Ice Cube as the ill-tempered Captain, and Dave Franco (brother of James), who plays Eric, Schmidt’s new best friend. However, Hill’s chemistry with Brie Larson is even better and both look endearing when they share scenes.

As much fun as it was for me to watch 21 Jump Street, I couldn’t help but notice a few problems. The first minutes felt pretty awkward, as we see a flashback of Jenko and Schmidt as teenagers. One of the final scenes felt a bit cheap and the overuse of “Korean Jesus” wasn’t funny to me, yet most people at the theater laughed a lot with it. My biggest fear was that 21 Jump Street would drag badly when the guys get baked, but thankfully Hill and Tatum’s performances recover momentum and push the film forward all the way to the end.

2012’s 21 Jump Street isn’t exactly faithful to the 1987 television series given that one is a drama and the other a comedy. However, the 2012 film adaptation works very well enough on its own and even includes three surprising cameos that will please fans of the original series.