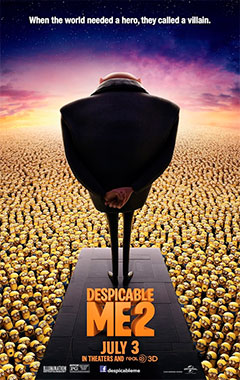 If there’s one thing I learnt from Despicable Me 2 is that there’s no party like a minion party.

In here, former villain Gru (Carell) is settling in his job of being a parent. That’s when he gets kidnapped/hired by The Anti-Villain League to help them found whoever stole a mutating chemical that transforms any living creature into indestructible killing machines. He gets to partner with Agent Lucy Wilde (Wigg) and together they scout this mall where traces of the chemical have been found. And there are minion shenanigans.

Despicable Me 2 is very action packed, but it’s still very family oriented. Gru has to deal with Agnes and Margo’s feelings, one desiring a mother and the other having her first crush, and thus some character growth is achieved. Edith remains mostly unchanged as the tomboy of the group. All in all, you can see through all the movie that while overprotective, Gru is a decent parent and cares for all his daughters.

Of course, Gru has his own feelings to deal with, with Lucy being around. She’s so over-the-top and enthusiastic, that you can clearly see this is her first “field trip” on her dream job. But she’s mostly competent and helpful, and that’s why I wished they did more with her character. Still, she clicked just fine with Gru and his family, minions included.

Talking about those, they are the reason that make Despicable Me 2 funnier than the original movie, even if it’s not as heartfelt. They did more with the minions than in the first movie, including being plot relevant instead of just slapstick-y cute.

Still, the most interesting thing was El Macho (Bratt), specially his fast-paced flashback presentation. It’s refreshing to see a movie that doesn’t mind having a POC villain. Although the Mexican theme (Cinco de Mayo included) was so overdone that it left me craving Mexican food after the movie ended.

As far as the 3D goes, it’s as gimmicky as one can expect in a children’s movie, which was great fun if not exactly that impressive. The 4DX though was one of the best 4DX I have ever experienced. Besides the usual movements, smells and water, we had temperature changes, wind, lights and even bubbles. All thanks to how active the animation in the movie was. So yeah, it was worth it.