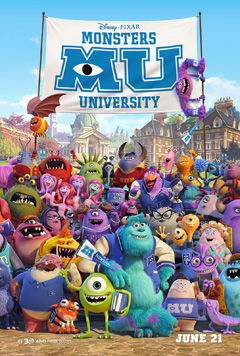 Some people say that Pixar has lost its touch- they’re literally mushed together with a big studio (‘evil’ Disney ruins everything, right?) and has lost the edge that once made “the little animation studio that could.” To some degree, they’re right. Long gone are the days making you believe toys would move when you don’t see them- oh, wait. Toy Story 3 was pretty good. But, yes, they haven’t come up with an original idea since… they did Up in 2009.

Phew. That was a long time ago, wasn’t it?

For Monsters University, the guys at Disney/Pixar are dusting off the vault of memories bringing back some of our favorite characters from their 2001 hit Monsters Inc., at the same time they take us back to college as we see the studious Mike Wazaowski (Crystal) eager to start the school year at MU as a freshman at the School of Scaring where he meets James ‘Sulley” Sullivan (Goodman), the slacker with the family name that will eventually become Mike’s best friend forever.

However, all great friendships never usually start with the right foot- Mike and Sulley despise each other and that gets them in trouble when respectfully scary Dean Hardscrabble (Mirren) kicks them out of her program, and they join a group of nerdy outcasts — demure Squishy (Sohn), old-tentacled Don (Murray), double-headed Terri & Terry (Hayes + Foley), and fluffy zen Art (Day) — from the Oozma Kappa house for the Scare Games, in which they will compete against the Eta Hiss Hiss, the Slugma Slugma Kappa, the Jaws Theta Chi, the Python Nu Kappa, and the Roar Omega Roar lead by the douchiest monster, Johnny (Fillion).

Though Monster University doesn’t have the same emotional weight that Monsters Inc. had, it’s enjoyable, especially if the best part for you was the alternate world of monsters and not Boo. It’s fun and creative to recreate college life, which would be an aspect most appreciated for those who had already grown up watching the first film. Despite the trailer having a lot of what’s funny throughout, there was one segment (during the first level of the Scare Games) where I laughed to my heart’s content. The rest is a mix of chuckles and nudges to its origin, particularly when we’re about to wrap up the tension between our main characters. We are always watching. Always.

Aesthetically, Monster University delivers a natural progression in technology, using the developments used on The Blue Umbrella, which opened the show… even if it’s hardly noticeable. It does, however, showcase lovely character designs perfect for toy-making, as well as an MU brand ready for other products. I mean, who wouldn’t want a four-sleeves hoodie from MU?

While ultimately, the relationship between Mike and Sulley didn’t move me as much as I would have love to, I did understand Mike’s dream of wanting to scare and ultimately finding out he was better suited for something else. In a world where so many are often told “they’re special,” it’s great to have a story where it’s fine to “just be OK.” Queue from McDull [1].